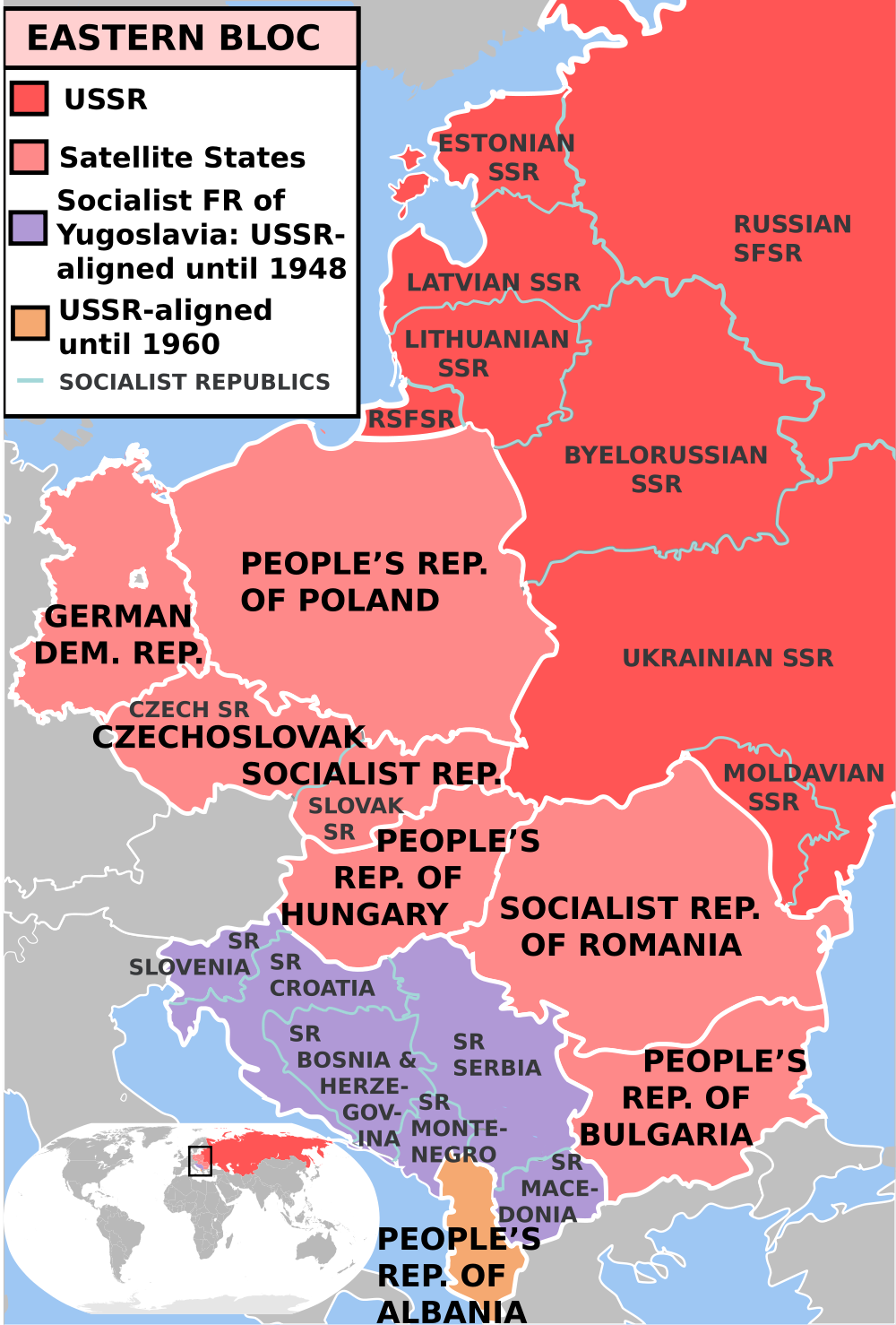 The establishment and control of the Soviet satellite states

How had the USSR gained control of Eastern Europe by 1948?

Between 1945 and 1949 Stalin created a Russian empire in Eastern Europe. This empire included Poland, Hungary, Romania, Bulgaria, Czechoslovakia and East Germany. Each had a Communist government. In the West they were called satellites because they clung closely to the Soviet Union like satellites round a planet. 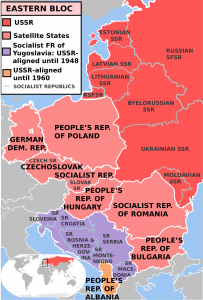 Stalin was able to create this empire for a number of reasons. The first was the military might of the Soviet Union in Europe after 1945. Unaffected by the pressures of domestic opinion, Stalin was able to keep huge numbers of troops in a state of readiness, whereas the western powers were under intense pressure to ‘bring the boys back home’ as soon as possible. Neither Britain nor the United States were prepared to fight over Eastern Europe and Stalin knew this.

Another reason for the spread of Communism after the war was the gratitude of many Eastern Europeans for their liberation from Nazism. This, and the often appalling conditions at the end of the war, played into the hands of east European communist parties, which were, of course, backed by Stalin and the Soviet Union. Leaders of these parties were often trained in Moscow and certainly received much friendly assistance from the Russians. At first Stalin moved slowly. There was no sudden imposition of Soviet Communism. Opposition parties were allowed and in the first elections the voters were given a relatively free choice, provided the governments they chose were at least sympathetic to Communist aims and ideals. But gradually the East European Communists took over the running of their countries. Cominform and Comecon aided this transition toward them becoming Satellite states.

By 1946 the West was becoming increasingly aware of what was happening in eastern Europe. One of the most prominent critics of the changes was Winston Churchill, now leader of the opposition in Britain. In March 1946 he made his now famous ‘Iron Curtain’ Speech at Fulton, Missouri (USA) in which he declared that: “From Stettin in the Baltic to Trieste in the Adriatic an iron curtain has descended across the continent”. Further, he claimed that the Russians were intent on “indefinite expansion of their power and doctrines”.

In the meantime, state after state in eastern Europe fell under communist control and Soviet influence. The map above illustrates the manner in which satellite states were created by the Soviet Union.

The story of two countries will serve to illustrate the nature of the Soviet takeover.

At the Tehran Conference in 1943 Stalin had agreed to attack Germany through Poland and the Danube countries (Austria, Hungary, Rumania and Bulgaria). The USA and Britain also agreed that the USSR was to get its pre-1921 land back from Poland (which the Poles had seized during the civil war). The Poles were to get parts of eastern Germany as compensation, including the rich industrial area of Silesia. But the Polish government-in-exile in London refused to accept this proposal which, despite their objection, later became part of the Yalta Agreement.

As the Red Army approached the Polish capital, Warsaw, in August 1944, the London Polish government organised a desperate rising by the Polish Home Army against both the Germans and the thought of a Red Army ‘liberation’. It was a disaster. After two months 200,000 Polish civilians were dead. Warsaw was flattened by the Germans. For his part, Stalin had refused to support the rising and even ordered the Red Army to halt its advance, giving the Germans the opportunity to crush the rising mercilessly.

The failure of the rising destroyed the support the London government-in-exile had enjoyed in Poland itself. Stalin’s Communist-dominated Provisional Government of National Union in Lublin won the initiative and gained in support. This signed a Treaty of Friendship and Postwar Cooperation with Stalin, who promised his support in return. The London Poles were forced to join this government as a minority partner in June 1945 and to accept the Yalta Agreement.

In Poland, although individuals were persecuted, there was none of the heavy repression which had taken place in the USSR in the 1930s. At first the communists were relatively popular. They had fought the Nazis as nationalists and so were considered by many to be heroes. They also brought in land reform which gave land to the peasants who made up two-thirds of the population.

In the elections of January 1947 the Communists and their allies won 384 out of 444 seats in what was seen in the West as a rigged election. The Peasant Party leader, who had not been able to campaign freely, resigned and fled into exile in London. After that the Communist government banned other political parties and established a one-party state.

Events in Czechoslovakia were just as tragic. The prewar Prime Minister, Benes, was not a communist, but he no longer trusted the West. He had seen at Munich in 1938 how Britain and France had abandoned his country to Hitler. He was therefore determined to establish good relations with the USSR in order to have protection for his country in the future. He visited Stalin and told him how he intended to favour the communists in his own country after the war. In return he wanted Stalin’s help to deport the 2 million Germans still living in Czechoslovakia. Stalin got this request written into the Potsdam Declaration.

In May 1946 the Communist Party received 38% of the vote in free elections. Again, to many Czechs the communists were national heroes at this time. The Social Democrats also did well in the elections and as their leadership was largely in favour of an alliance with the USSR, the two parties formed a coalition government with Benes as President and Klement Gottwald as Prime Minister. However, in 1947, a dispute arose over whether the Czechs should seek aid from the American Marshall Plan (see below). Benes, and other non-communists in the government, hoped that Czechoslovakia could become a bridge between east and west. Stalin, however, was determined to prevent this and therefore approved a coup d’état by Gottwald to remove the opposition and force Benes to resign. A month later, the leading non-communist in the government, the Foreign Minister, Jan Masaryk, was found dead beneath his office windows. His death was officially described as suicide, but subsequent opening of the archives proved that it was murder. When new elections were held in 1948 there was only one list of candidates, all communists.

A third example is that of Hungary. See our page on the Hungarian revolution for further details.

Consequences of the creation of Soviet Satellite States

Diplomatically the creation of the satellite states fuelled the emergence of the Cold War. They heightened a feeling in the west that Stalin intended to spread communism, known as the Red Scare. This was at odds with the Truman Doctrine. Once the east of Europe had been taken under Stalin’s wing, containment became necessary for the west. From the perspective of the Soviet Union the satellite states gave them a buffer zone between themselves and a hostile west. They gained a large territory with which they could trade. It enhanced their power and, in theory, strengthened communism. East Germany and Berlin in particular became symbols of the struggle between the two superpowers for supremacy. It resulted in the Berlin Refugee crisis and later the Berlin Wall and Berlin Airlift.

The Satellite States importance to the Soviet Union is best illustrated by the links between their assertion of independence and the collapse of the Soviet union.