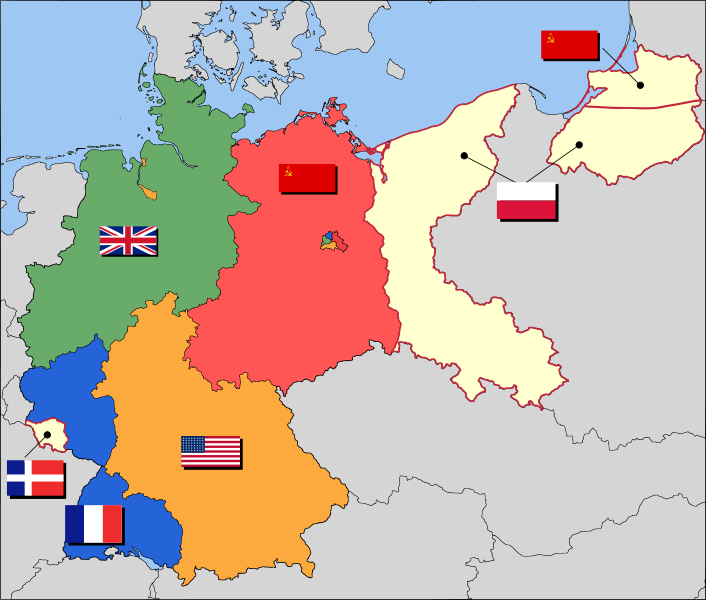 At the end of the war Germany was divided according to the agreements made between the major allied powers at the Yalta and Potsdam Conferences. As you can see on the map below the agreement gave each of Britain, France, the US and the Soviet Union control of a section of Germany. The Capital, Berlin, though lying deep within the Soviet area, was divided separately. 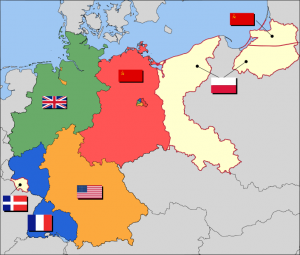 As the different powers assumed control of their respective areas there was a great deal of internal migration within Germany. Many Germans sought to move away from the Soviet region, and the Soviets expelled a large number of Germans from the region as well. This migration had been expected and at Potsdam it, along with economic considerations, were discussed and a plan put into place. As most of the heavy industry lay in the US and British Sectors some of it would be dismantled and sent to the East, to assist in regeneration of the area now under the control of the Soviet Union. The Soviet sector would in return send agricultural produce to the other sectors.

Deliveries of goods from the West commenced in early 1946. The Soviets though failed to deliver any of the much needed foodstuffs that had been agreed: though continued to expel Germans from their sector. As a result of the Soviet failure to send food, the US stopped sending industrial goods to the Soviet sector in May 1946.

As the issue of running the British and US sectors became increasingly complicated the Foreign Secretaries of both nations met, in December 1946, to discuss possible solutions. They came up with idea of unifying both sectors in order to streamline the way in which the economy was handled and reduce the administrative burden. This unification, Bizonia, came into force on January 1st 1947.

In April of 1949 the French were persuaded to join the British and Americans in a joint administration of the Western sectors. This trizonia then became the Federal Republic of Germany, better known as West Germany.

The refugee crisis, creation of Bizonia and Soviet decision to stop sending supplies added to tension at the start of the Cold War. Bizonia was a defining moment in the establishing of the ‘Iron Curtain’.