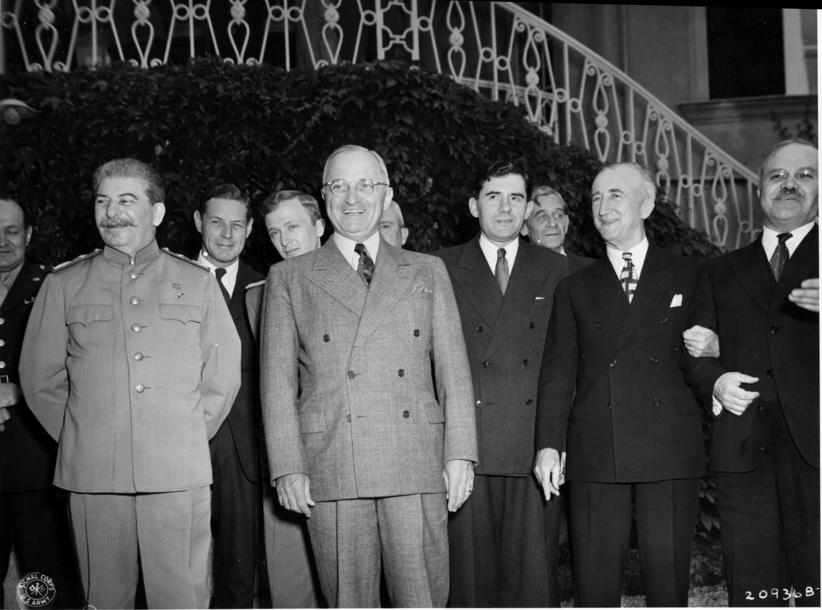 The Tehran, Yalta and Potsdam Conferences

Germany’s invasion of Russia in 1941 forced Stalin to seek military help. Despite the very different political systems in Russia, the United States and Great Britain, the threat of a common enemy brought the Allies together. The leaders of the three powers (or their representatives) met relatively frequently, declaring their shared beliefs as a way of maintaining morale at home. In 1942 the Atlantic Charter gave support for the principle of national self-determination. The next year at the Casablanca Conference America reassured Russia that there would not be a compromise peace with Germany, but it remained to be seen how much these ‘promises’ made in the midst of a desperate military situation could be carried out at the end of the war. 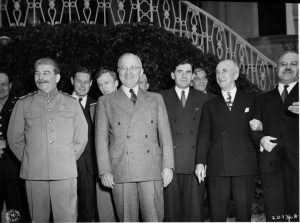 By the end of 1943 as the war situation improved, the Big Three started to look forward to the prospects for peace. At the Tehran Conference in November Stalin met with Churchill and Roosevelt for the first time. The Red Army had just begun to push the Germans back after the Battle of Stalingrad, the Germans had been forced out of Africa, Italy had been invaded and America had halted the Japanese in the Pacific. In more confident mood, the Big Three made it clear that they had one aim: the destruction of Germany and Japan. Britain and America agreed to open a second front against the Germans early in 1944 by invading northern France. Stalin, in turn, promised to enter the war against Japan as soon as Germany was defeated. After the war Russia was promised compensation in Poland, whilst Poland would gain some German territory, and all the leaders agreed on the idea of a new world peace organisation to replace the League of Nations.

The conference at Yalta in the Crimea was the first of the conferences in 1945 to try to plan out the future after the end of the war. It was attended by Stalin, Roosevelt and Stalin, although Roosevelt was already ill and died two months later.

At the time (still during the war), Yalta was thought to be a great success. Agreement was reached on a number of points, including:

* establishment of a United Nations Organisation
* the division of Germany into occupation zones for each power
* Berlin (in the Russian zone) also to be split into zones
* similar arrangements for the occupation of Austria
* free elections to be held in the states of Eastern Europe
* Stalin would join the war against Japan 3 months after Germany’s defeat
* Bessarabia and the Baltic States of Lithuania, Latvia and Estonia (seized by Stalin in 1939) would become part of the USSR

However, there were already some signs of mutual suspicion developing at Yalta. In return for joining the war against Japan, Stalin wanted territorial compensation in Manchuria and the whole of Sakhalin Island. Poland posed even greater problems. As the Russians swept through Poland in 1944/5 they established a new communist government in Lublin, despite the fact that there was already a Polish government-in-exile in London. It was agreed at Yalta that some members of the non-communist London-based government should be allowed to join the Lublin government, while, in return, Russia would be allowed to keep the strip of Eastern Poland she had occupied in 1939. Nevertheless, Roosevelt and Churchill refused to agree to Stalin’s demands that Poland should be given all German territory east of the Rivers Oder and Neisse.

So, to sum up the Yalta Conference, whilst some agreements had been secured, it was by no means certain that promises during wartime would be carried out and grounds for mutual suspicion grew.

After the German surrender in July 1945 the Big Three met again in Potsdam, just outside Berlin. The main representatives were Stalin, Truman (Roosevelt’s successor as President of the USA) and Churchill (who was then replaced by Clement Attlee after the Labour victory in the British general election of 1945). The conference revealed a distinct cooling-off in the relations between East and West.

The war with Germany was over, but no agreement had been reached on her long-term future beyond what had been decided at Yalta. It was understood that Germany should be disarmed, the Nazi Party disbanded and its leaders tried as ‘war criminals’. Truman and Churchill had already been antagonised because the part of Germany east of the Oder-Neisse line occupied by Russian forces was being run by the pro-communist Polish government. This was precisely what Churchill and Roosevelt had refused at Yalta. What was more, the Polish government had started to expel some 5 million Germans living in this area.

Even so, a few clear agreements were reached:

* For the time being, Germany was to be run by a Control Council made up of the four military commanders of the four zones
* Germany was to be given the “chance to … rebuild its life on a democratic and peaceful basis”, including elections at some time in the future
* Nazi leaders were to be put on trial
* Reparations: each power could take what it wanted from its own zone, in addition, Russia could take 25% of the industrial equipment in other zones
* Similar arrangements were made for Austria

Just as significant as what was said at Potsdam was what was not said. Truman did not inform Stalin about the nature of the atomic bomb, though he did inform Churchill at the conference. A few days after the conference ended, two atomic bombs were dropped on Japan and the war ended quickly on 10 August without the need for Russian aid against Japan. Even so, the Russians declared war on Japan on 8 August and invaded Manchuria. Though they annexed south Sakhalin as was agreed at Yalta, they were allowed no part in the occupation of Japan.

The world had entered the nuclear age, but in doing so further tensions and suspicions had developed between the East and the West. The Cold War had begun.