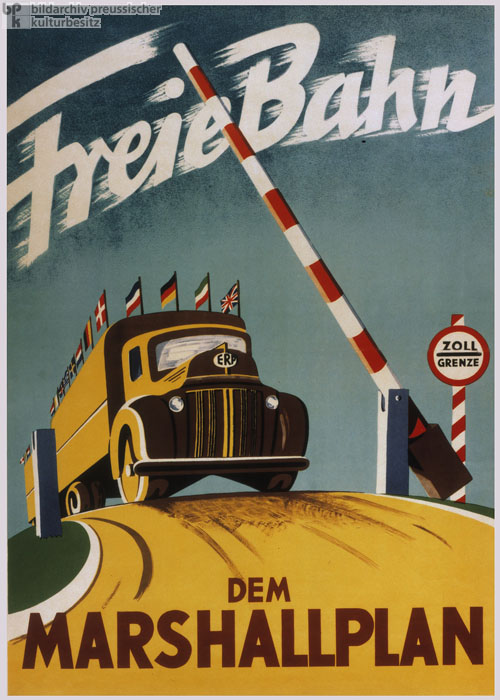 The Truman doctrine largely concerned itself with military aid in defence of ‘freedom’, but communists could gain power by means other than outright aggression. Europe’s economic situation in 1945 was desperate. Many countries were facing severe food shortages, disrupted communications, low production and unemployment. Like after the First World War, it would take the world and individual economies some time before they could recover. Many believed that, as in 1917/8, these were ideal conditions to encourage the support of communism. As one US State Department official wrote:

“Hungry people are not reasonable people. Their thoughts are concerned with their own misery and particularly with the tortured cries of their hungry children. They are the easy victims of mass hysteria. When people become frightened … democratic precepts mean nothing.” 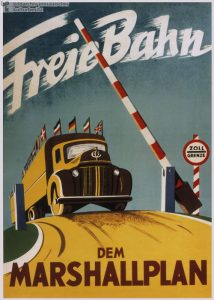 The success of the French and Italian communist parties in postwar elections were particularly worrying proof of these fears. What was more, the economic crisis in Europe threatened prosperity in the USA as well. Without a general recovery international trade would be damaged and the US was unlikely to recover any of the substantial loans it had made to its allies.

The situation encouraged the American Secretary of State, General George C. Marshall, to propose that the USA should help to rebuild European economies by giving them massive sums of money. His European Recovery Programme (ERP) offered economic and financial assistance wherever it was needed. “Our policy”, he declared, “is directed not against any country or doctrine, but against hunger, poverty, desperation and chaos.” Nevertheless, the need to ensure markets for US goods and the advantages of wealth as a barrier to the spread of communism were not lost on the Congress, which approved the plan. Over the next four years over 13,000 million dollars of Marshall Aid flowed into western Europe, promoting economic recovery. A total of 16 west European countries joined the Organisation for European Economic Cooperation (OEEC), which distributed American aid.

The Russians, however, knew that there was more to Marshall Aid than benevolence. Although aid was in theory available to eastern Europe, including the Soviet Union, Molotov, the Russian Foreign Minister, denounced the whole idea of ‘dollar imperialism’. He saw the plan as no more than a capitalist device for gaining control over western Europe and, worse still, for interfering in eastern Europe, which Stalin considered to be in his ‘sphere of influence’. Russia rejected the offer of help and neither her satellites nor Czechoslovakia, which was showing interest, were allowed to take advantage of Marshall Aid. The establishment of the Cominform later that year was clear evidence that the lines between East and West were hardening and a cold war was beginning.