Stalin’s will and personality had been stamped across the Soviet Union and her satellite states. The regime was harsh and repressive and dissent was most certainly not permitted. The Eastern European nations under his influence did as they were told and were effectively run from Moscow. When Stalin died the Soviet Union was led by a central committee rather than one individual. Many of this new leadership had more liberal views than Stalin had done, and this resulted in almost immediate changes in policy. 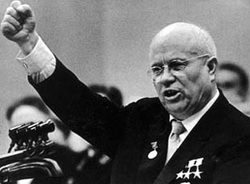 Just a month after the death of Stalin the new leadership made two moves that signalled a change in approach. They issued amnesties to many of those imprisoned in the Gulags and at the same time purged the KGB of the most brutal of its agents, including its head, Beria. Optimism for a more relaxed relationship between Moscow and her satelitte states increased when the Soviet leadership encouraged Cominterm members to adopt collective leadership as a model.

The advice from Moscow was now much more moderate. The authorities in east Berlin were admonished for raising production quotas at a time when workers were already struggling. It didn’t work though. The East German leadership refused to back down and riots resulted in the Red Army taking to the streets of Berlin in 1953: which enabled Ulbricht, the East German leader to cement his position as a sole leader for the coming years.

Soviet – Yugoslave relations warmed as a result of De-Stalinisation. Stalin had disliked the methods employed in Yugoslavia and did not view the country as an authentic communist state. In 1955 a Soviet Delegation visited Belgrade and made their peace with the Yugoslav leadership.

Soviet pronouncement made by Khruschev:

” . . . The people of our countries have long been united by ties of
…fraternal friendship and by common struggle. . .. We sincerely regret
what has happened…. We have carefully studied the documents on
which the grave accusations and the grave offenses directed against the
leaders of Yugoslavia were founded. Facts prove that these documents
were complete forgeries. . ..

Following this public move to warmer relations between Moscow and Belgrade, other Communist nations also improved their relationship with Yugoslavia.

In Czechoslavakia the changes as a result of the process of Destalinisation were quite limited. Collective leadership was introduced but amnesties were not considered and there continued to be harsh repression of opponents of the state.

In 1956 Nikita Khrushchev made his ‘secret speech’ to senior party officials in Moscow. The speech criticized the Cult of personality and the harshness of the regime under Stalin. News of the speech soon spread around Europe. Shortly afterwards it was announced that Cominform was to end. The people of Eastern Europe now looked to their leaders and, in many cases, expected change. In some countries the demand for change was open and rapid, such as in Hungary.

As the new de facto leader of the Soviet Union, Khruschev now made attempts to improve relations with the rest of the world, a period known as Khruschev’s Thaw. Moscow hosted a ‘Sparkidia of the Peoples of Russia’ event hich celebrated the diversity of the Soviet Union; in 1957 the World Youth Games were held in Moscow and censorship laws were liberalised, allowing the purchase of some Western Films and journals and the production of films inside the Soviet Union that were midly critical of the previous regime.

Relations with the west also improved. Khruschev wanted peaceful co-existence’ with the western powers and attended a Peace Conference in Geneva and met with President Eisenhower.

Disambuituity: De-Stalinization, Destalinisation, De-Stalinisation. The word is spelt differently in different parts of the world but all relate to the process of removing the influence of Stalin following his death. Russian: десталинизация, Destalinizatsiya