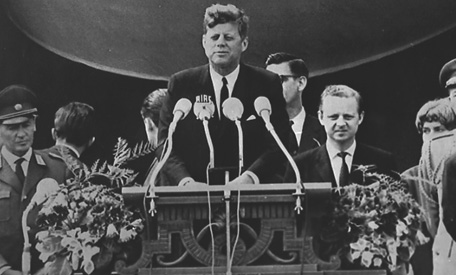 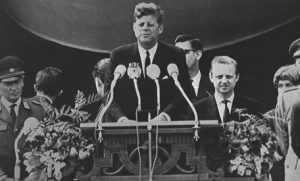 There are many people in the world who really don’t understand, or say they don’t, what is the great issue between the free world and the Communist world – let them come to Berlin.

I want to say, on behalf of my countrymen, who live many miles away on the other side of the Atlantic, who are far distant from you, that they take the greatest pride that they have been able to share with you, even from a distance, the story of the last 18 years.

I know of no town, no city, that has been besieged for 18 years that still lives with the vitality and the force, and the hope and the determination of the city of West Berlin.

Freedom is indivisible, and when one man is enslaved, all are not free.

When all are free, then we can look forward to that day when this city will be joined as one and this country and this great continent of Europe in a peaceful and hopeful globe.

When that day finally comes, as it will, the people of West Berlin can take sober satisfaction in the fact that they were in the front lines for almost two decades.

All free men, wherever they may live, are citizens of Berlin, and, therefore, as a free man, I take pride in the words “Ich bin ein Berliner”.