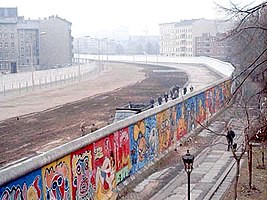 Construction of the Berlin Wall and its impact

On the night of August 13th, 1961, the East German authorities deployed workers and soldiers to cut off West Berlin. They placed posts on roads, barbed wire and armed guards. Telephone lines were cut to the West. In the morning, it was virtually impossible to pass from East Berlin to the West. In the coming days these initial blockades were developed into fences topped with barbed wire: this structure being replaced by the wall in 1965, which was again redeveloped in the late 1970’s. Behind the wall the East Germans created a second barrier, a no mans land. Anyone entering this area was in danger as the East German guards were permitted to open fire on people in this area without warning.

The purpose of the wall was simple. It was designed to stop the large scale migration of East Germans to the West. Between the building of the wall in 1961 and its fall in 1989 it is estimated that around 5000 people managed to escape into West Berlin: over 2 million had done so before the construction of the wall.

John F Kennedy responded to the construction of the wall by visiting the city and ensuring that it’s inhabitants were supplied. Divided Berlin came to symbolise the gulf between the two sides in the Cold War. It was quite literally where east met west.