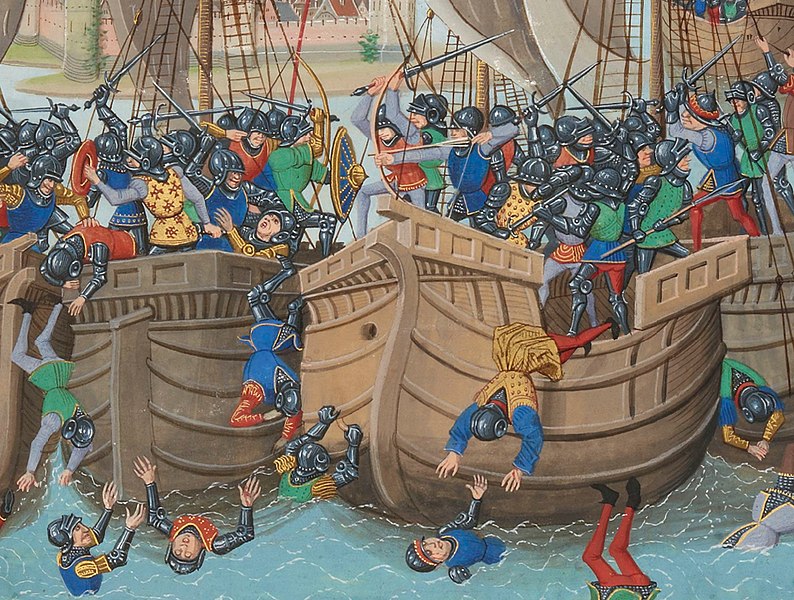 The Hundred Years War 1337 – 1453 was a series of wars fought between England, France, and allies of both parties. The wars began as a dispute over the sovereignty of Aquitaine and rival claims to the throne of France. Philip of Valois [Philip VI of France] and Edward III of England both had a claim to the French crown when King Charles IV passed away with no male offspring. Philip was quickly installed as the new King of France. The accession of Philip saw renewed efforts by the French monarchy to exert its control over the semi independent Duchy of Aquitaine, of which King Edward III of England was the hereditary duke. Arguments over paying homage soon escalated, with diplomatic issues arising over the status of Robert of Artois along with both France and England attempting to dominate affairs in the Low Countries.

The disputes led to the outbreak of war between France and England in 1337, though there had been conflicts in which both party had an interest prior to this date.

The first phase of the war saw large armies recruited for an expected campaign in the Low Countries. It saw the French embark on a strategy of raiding English ports and coastal areas, which they did with devastating effect when raiding Southampton, Portsmouth, the Isle of Wight, and some of the Cinque Ports. England responded with a success at the Battle of Sluys which led to opportunities for English forces to be landed in areas close to Edward’s allies in Ghent.

The Hundred Years War really burst into life on the battlefield in the 1340’s. The Duchy of Brittany suffered a succession crisis with two claimants to the Dukedom soon being backed by the Kings of France and England. With John of Montfort also being an English noble, he found support from Edward III, he was opposed by Charles of Blois who was backed by the French King, Philip VI. Fighting in this dispute was to last from 1341 until 1364.

Included the Combat of the Thirty.

The Crecy Campaign and capture of Calais

As English forces were now based in Aquitaine, parts of Brittany, and in the Low Countries, Edward III embarked on a campaign in 1346 that was to become one of the most famed and lauded in English military history. Having landed an invasion force on the Cotentin peninsula Edward III marched into Normandy before facing a large French army at Crecy. The Battle of Crecy was an astounding success for the English. In its aftermath the English marched north, destroying much of France’s northern economy whilst heading for the port of Calais. After a long siege the port fell to Edward III, becoming an ‘English town in France’ that served as a staging post for English military actions and exports for two centuries.

The Black Prince, Chevauchee’s and the Principality of Aquitaine

The use of campaigns of this nature was to continue to bring the English successes. In 1355 the Black Prince undertook a chevauchee [fast moving campaign] across the full width of southern France. In 1356 he again took to the campaign trail, this time engaging the French Royal army at Poitiers. Again, the English secured an overwhelming victory. So decisive was this win that it included the capture of King John II, who was to remain in captivity until 1360, and again shortly afterwards to act as security against ransom payments.

The Black Prince’s chevauchee travelled as far as Narbonne. Read about the Sack of Narbonne here.

Whilst Edward of Woodstock, the Black Prince, gained renown as an excellent commander, he and England saw the Duchy of Aquitaine enlarged and prospering. So much so that King Edward III created his son the Prince of Aquitaine, converting the Duchy into a Principality. It’s success was, however, short-lived. The French developed new tactics of their own, avoided large battles, and made many inroads into the boundaries of English held Aquitaine. This was to the point where an unwell Black Prince returned to England and resigned his position as Prince of Aquitaine: which by the end of the Black Princes life had less English held territory than it had at the beginning of his campaigns.

Periods of Peace in the Hundred Years War

The Hundred Years War was not continuous fighting. In Richard II’s reign England undertook a controversial policy of seeking peace. It was a policy based on the economic and social scenario within the country at the time: coming shortly after the Peasants Revolt and as the country was still recovering from the Black Death. Peace was welcomed in France at this time as well. The French too had endured revolts, the economy was in need of recovery, and the appetite for warfare was low after decades of war with England and bitter in-fighting.

The peace was a fragile one though. As revolts against Henry IV broke out in Wales, France saw fit to send aid. Raids into Aquitaine once again posed problems. France though was again suffering from internal political divisions. Rival factions in court, the Armagnac’s and Burgundian’s, brought unrest to Paris, episodes of civil war, and all whilst France had a monarch who was regularly too unwell to govern.

King Henry V of England sought to take advantage of this. Reiterating the English claims to the Duchy of Normandy and Kingship of France, Henry launched a campaign in 1415 that saw his force overcome huge problems to inflict a blow on the cream of French nobility that was devastating. That took place at the Battle of Agincourt, where thousands of French nobles and knights met their deaths in hugely decisive English victory.

Henry’s victory was soon followed up with English campaigns that were aimed very specifically at the conquest of Normandy. The success of these campaigns coupled with ongoing disputes in France led to one of the most remarkable treaties signed in European history. The French agreed that Henry V of England and his heirs should be the heirs to the throne of France. This disinherited the Dauphin, whom was in dispute with his mother and some uncles. Additionally, Henry V would act as Regent of France, ruling in the place of King Charles VI. And to cement the seemingly insurmountable position that Henry V had achieved, he was also contracted to marry Princess Catherine of Valois, uniting the French and English royal families as a means of legitimising the Dual Monarchy.

Following the death of King Henry V in 1422 England was ruled by a Regency Council on behalf of the infant king, Henry VI. Henry VI was crowned as King of England and later as King of France, the only monarch to have been crowned King of both nations. The hold on France though faced several problems. Financing the occupation was expensive and proved to be problematic. Much of the gained land and influence had come at a time when England was allied to the Duchy of Burgundy. Shortly after the death of the Duke of Bedford in 1435, the Burgundians reversed their allegiance and sided with France. The army of the French claimant to the throne became more adept and began to recoup lands that had been under English control. Famously, this recovery was inspired by Joan of Arc, culminating in King Charles VII of France being crowned in Reims.

Including: The Siege of Montargis

The 1440’s: English setbacks in the Hundred Years War

In the 1440’s English rule suffered several setbacks in France which was accompanied by political disagreements over the way in which the defence of France should be approached. Negotiations were opened between the two nations that culminated in a treaty which agreed a marriage contract between King Henry VI and Margaret of Anjou. Whilst this was aimed at appeasing the French, it also included a secret clause to hand back the important region of Anjou and Maine to French control. The period of truce was then used by the French to develop a professional army and new tactics. In contrast, the English failed to invest in the defences of Normandy during this period.

A consequence was that at the end of the truce the French were able to reconquer Normandy in a relatively short period of time. A victory in the Battle of Formigny was followed by successful sieges of the remaining English held strongholds. In 1449/50 all of the northern French territories, except Calais, that had been held by England was lost to the French. France then turned her attention to Aquitaine. An initial victory there was met with a short lived recovery by the English through the deployment of a force under Sir John Talbot. However, this army was defeated by the French at the Battle of Castillon in 1453 and Bordeaux fell for the final time to French forces later in the same year. This brought an end to the Hundred Years War, though there were still acts of aggression via raids and piracy for years following this capitulation.

Women in the Hundred Years War

Agnes Randolph – known as ‘Black Agnes’ the Countess of Dunbar captained her castle successfully against a protracted siege.

Agnes Sorel – Official Mistress to the King of France.

Catherine of Valois – description of the coronation of the Queen Consort of King Henry V of England.

Eleanor Cobham – Rose from relative to obscurity to becoming the Duchess of Gloucester. Tried on charges of witchcraft.

Jacqueline of Hainault – at the centre of disputes over her succession to Hainault. Controversy surrounded her ‘marriage’ to Duke Humphrey of Gloucester.

Jeanne de Armioses – a ‘fake’ Joan of Arc. Claimed to be the maid of Orleans and had the support of Joan’s brothers.

Jeanne de Clisson – The Lioness of Brittany. Led military campaigns and piracy against the French following her husbands execution.

Jeanne de Penthièvre, Duchess of Brittany – undisputed Countess of Penthièvre who had a disputed su jure claim to the Duchy of Brittany.

Joanna of Flanders – Wife of John of Montfort. Joanna played a key role in the politics surrounding the War of Breton Succession.

Margaret of Bavaria – Duchess and Regent of Burgundy.

Perionne of Brittany – A mystic who like her contemporary, Joan of Arc, was executed by burning at the stake.