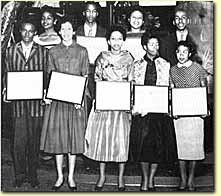 Following the Supreme Court’s ruling in the Brown v Topeka case the NZZCP began registering black students in previously all-white schools. The Little Rock Board of Education had agreed to implement de-segregation and in 1957 the NAACP registered 9 gifted young black pupils at the Little Rock High School, Arkansas. However the decision to de-segregate was not welcomed by everyone. The Governor of Arkansas was opposed to the change and in order to prevent the pupils from attending the school he ordered the National Guard to block their way into the building. The sight of armed soldiers blocking the pupils route into school led to the issue becoming major news. President Eisenhower ordered the Governor to comply with the Supreme Court’s ruling and the Mayor or Little Rock, worried about the large crowds turning up at the school asked for the 9 pupils to be protected. In order to ensure that the 9 were able to enter the school safely President Eisenhower made two decisions. Firstly he federalised the National Guard, placing them under his control rather than answering to the Governor. Secondly, he deployed members of the 101st Airborne Division to escort the pupils to and from school: enforcing the right to a desegregated school.

The 9 pupils faced a great deal of racism and were tormented and spat at on route to the school and inside the school itself. One of the 9 was suspended for reacting to provocation.

In order to get his own way the Governor passed a law that allowed him to close ALL of the schools in Little Rock. His plan was to then hire them out to private companies who would operate segregated, private, schools. He persuaded the townspeople to vote in favour of this in a referrendum, claiming that the desegregation would lead to violence if it wasn’t done slowly and carefully. Governor Faubus’ private schools didn;t hapen though. Instead, the schools remained closed for an entire year.

The schools re-opened in 1959. The ‘Little Rock 9’ returned to school along with the other pupils. However they were far from welcomed by many other pupils.

Eisenhower Archive. The digital archive of president Eisenhower holds numerous copies of documents relating to the events in Little Rock. Click here to go to the Eisenhower archive.

Thinkquest. Thinkquest lesson and information about the Little Rock Nine.

NPS. Article and images relating to the Little Rock Nine.