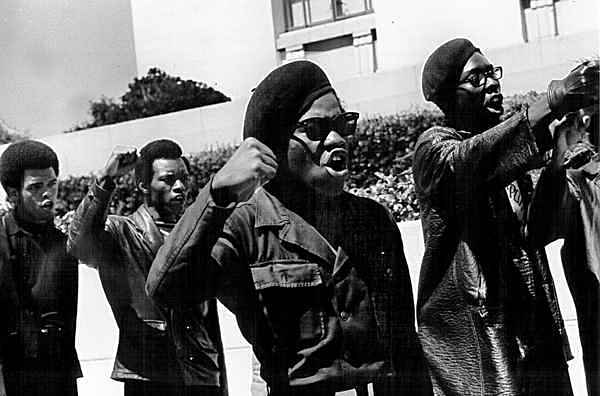 The Black Panthers were founded in Oakland in October 1966 by Bobby Seale and Huey Newton. The initial aim of the organisation was to protect Afro-American communities from police brutality. The leaders of the organisation generally speaking had socialist ideals but the fact that they were also Black Nationalists led to membership being drawn from people with many political views.

The Black Panthers published a newspaper from 1967. This spread their views and gathered a large readership, some quarter of a million copies were being circulated by 1968. It was at around this time that the party created their 10 point platform, see the sources below. This called for greater equality and specific rights for Blacks.

As the Black Panther movement developed they condemned black nationalism, saying it was black racism and looked for a more racially inclusive solution.

Activities of the Black Panthers:

The Black Panthers ran ‘survival programs’ designed to help the communities that they worked in. For example in Oakland they began a free breakfast for children campaign and set up medical programs that offered free medical checks and screening for sickle cell disease. In 1971 they opened their own school which did away with the grading system and allowed pupils to be taught in mixed age groups of pupils at the same level: so you could be sat next to someone 4 years older than you in Maths, if you were good at it, or next to someone a few years younger than you, if you found it harder.

One of the main aims of the movement was to prevent police brutality. During the 1960’s there had been several race riots in the US and the police, being largely a white force, had been seen as over reacting and brutal in many cases. To combat this the Black Panthers often organised armed patrols to follow the police around and to intervene where they thought the police were being brutal. This led to violent confrontations in which both police officers and Black panthers were killed. One reaction to this was increased police recruitment of black officers. Some of these new recruits were used to infiltrate the Black Panthers and others were deliberately sent on arrest missions that involved members of the organisation.

The movement fizzled out in the 1970’s as the leadership was torn between reformist policies and radicalism. They were faced by increased legal costs and often could not agree on policies. Historians do not agree on a date upon which the movement ceased to be effective though, as many members continued to hold prominent positions, or be prominent local activists.

Source: the Ten Point Platform of the Black Panthers

1) Freedom; the power to determine the destiny of the Black and oppressed communities.

2) Full Employment; give every person employment or guaranteed income.

3) End to robbery of Black communities; the overdue debt of forty acres and two mules as promised to ex-slaves during the reconstruction period following the emancipation of slavery.

4) Decent housing fit for the shelter of human beings; the land should be made into cooperatives so that the people can build.

5) Education for the people; that teaches the true history of Blacks and their role in present day society.

7) End to police brutality and murder of Black people and other people of color and oppressed people.

8) End to all wars of aggression; the various conflicts which exist stem directly from the United States ruling circle.

9) Freedom for all political prisoners; trials by juries that represent our peers.

World History Archives – a Collection of documents and sources about the Black Panther movement.