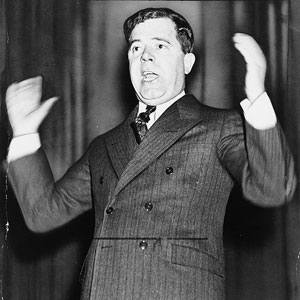 Thought the new laws went too far. Relief and welfare went too far and cost too much. They also undermined traditional American values. (Rugged Individualism carried on!) They wanted less government intervention, a hands off approach.

Thought the laws did not go far enough. He wanted to share all wealth out and use public money to help the poor even more. He was also corrupt, a thug and rigged elections. He was governor of Louisiana, and then its Senator.

“You are giving a little man a biscuit to eat, and you put a barrel of flour more taxes on top of his head to carry.”

“We do not propose to say that there shall be no rich men. We do not ask to divide the wealth. We only propose that, when one man gets more than he and his children and children’s children can spend or use in their lifetimes, that then we shall say that such person has his share. That means that a few million dollars is the limit to what any one man can own.” February, 1934.

Said that Roosevelt was “anti-God”. Wanted to provide more work and fairer wages for everyone. In the 1936 Presidential elections he joined forces with Frances Townsend who said the old were not being looked after properly. He wanted to give them money every month.

Coughlin, Townsend and Gerald Smith joined forces to fight Roosevelt in the 1936 election, Long having been replaced by Smith after the killing of Long in 1935. They had millions of supporters.

After the 1920s they wanted far quicker reform than FDR could give.

Although defeated in the 1932 election, 15.7 million people had voted for them. They loathed the New Deal.

In 1935 it ruled much of the New Deal legislation unconstitutional. It said that Roosevelt only had the right to pass national laws for all states, not pass laws that the state bodies should be responsible for.

WHAT SHOULD FDR DO?

Start again.The Wagner Act of 1935 protected workers rights to join Unions and the Social Security Act of 1935 set up a National Pensions system, unemployment insurance and help for the disabled and very young.

RESULT: ROOSEVELT HAD HUGE SUPPORT AFTER THE 1936 ELECTION VICTORY. ONLY TWO STATES, VERMONT AND MAINE VOTED AGAINST HIM. 27 MILLION VOTES FOR, 16 MILLION AGAINST.