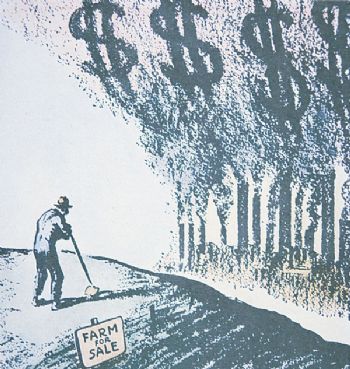 However, many people living in the agricultural (farming) areas of the USA could not afford to buy these new goods. They suffered from the effects of ‘Mass Production’.

Before mass production farming techniques were introduced into farming, everything was done using muscle power. This involved employing hundreds of people to plant and harvest crops. The introduction of ‘Hire Purchase’ and new machines such as combine harvesters and tractors meant that farmers could produce more food using less people. This led to an increase in unemployment and a drop in wages for farm labourers. Farming areas such as the South and the Mid West were badly affected.

Farmers were also badly affected by the introduction of mass production. As farmers produced more produce using their new machines the price of their crops dropped. This was caused by producing more food than was needed by the population. This surplus of food was called ‘overproduction’. As farmers couldn’t sell their produce prices dropped further which forced many farmers to borrow money from the banks and re-mortgage their land so that they could survive and not go bankrupt.

This situation was made worse by the introduction of Prohibition. In the past when the price of wheat had been too low they had used it to make whisky or ‘Moon Shine’. Prohibition, the banning of the production and drinking of alcohol, prevented them from doing this. In 1929, the price of wheat and barely hit an all time low. It was cheaper to burn the wheat as fuel than pay to transport it to market!