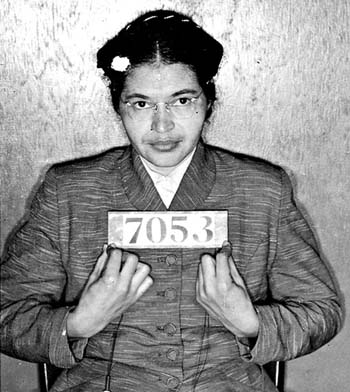 Rosa Parks was a member of the NAACP and was an active member of the civil rights movement in Montgomery, Alabama. On December 1st 1955 she was arrested for refusing to give up a seat on the bus for a white person. Thhough it was not the first time that this sort of thing had happened, or been challenged, it sparked a massive protest at the way in which civil rights were denied to Black people in America. Participants in the Montgomery Bus Boycott

Rosa Park’s arrest was quickly discussed by members of the Women’s Political Union who, that very evening, began printing posters calling for a boycott of the buses in Montgomery. The following Sunday the boycott was endorsed by many of the church communities in Montgomery. Following a successful one day boycott a group of people formed an organising committee and Martin Luther King Jnr was appointed as the president of the Montgomery Improvement Association. On the day of Park’s trial the committee handed out over 35,000 handbills (leaflets) which read:

Source: Rosa Parks recalling what happened in an interview in 1977

As I got up on the bus and walked to the seat I saw there was only one vacancy that was just back of where it was considered the white section. So this was the seat that I took, next to the aisle, and a man was sitting next to me. Across the aisle there were two women, and there were a few seats at this point in the very front of the bus that was called the white section. I went on to one stop and I didn’t particularly notice who was getting on the bus, didn’t particularly notice the other people getting on. And on the third stop there were some people getting on, and at this point all of the front seats were taken. Now in the beginning, at the very first stop I had got on the bus, the back of the bus was filled up with people standing in the aisle and I don’t know why this one vacancy that I took was left, because there were quite a few people already standing toward the back of the bus. The third stop is when all the front seats were taken, and this one man was standing and when the driver looked around and saw he was standing, he asked the four of us, the man in the seat with me and the two women across the aisle, to let him have those front seats.

At his first request, didn’t any of us move. Then he spoke again and said, “You’d better make it light on yourselves and let me have those seats.” At this point, of course, the passenger who would have taken the seat hadn’t said anything. In fact, he never did speak to my knowledge. When the three people, the man who was in the seat with me and the two women, stood up and moved into the aisle, I remained where I was. When the driver saw that I was still sitting there, he asked if I was going to stand up. I told him, no, I wasn’t. He said, “Well, if you don’t stand up, I’m going to have you arrested.” I told him to go on and have me arrested.

He got off the bus and came back shortly. A few minutes later, two policemen got on the bus, and they approached me and asked if the driver had asked me to stand up, and I said yes, and they wanted to know why I didn’t. I told them I didn’t think I should have to stand up…. They placed me under arrest then and had me to get in the police car, and I was taken to jail.

Scholastic. Very good overview of the story of Rosa Parks, the Montgomery Bus Protests and the way in which the Civil Rights Movement developed.

E-Portal – a short biography and a large selection of links to sites about Rosa Parks.