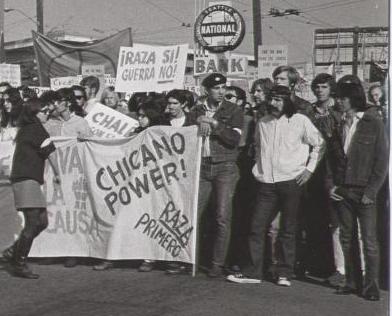 Mexican Americans have fought for rights for quite a long time. The origins of the Hispanic Civil Rights movement date back to the fixing of the current Mexico – American border. The League of United Latin American Citizens was then formed in 1929 to combat discrimination. The League (LuLac) promoted American ideals and only admitted members who were American citizens. In this way they hoped to win the support of politicians. Before the second World War the League worked to improve conditions, increase awareness of the right / need to vote and worked to improve the education of Mexican Americans. Following the Second World War the League developed education programmes that were designed to teach Mexican American children 400 commonly used English words before they went to school: this programme was then sponsored by the Texas State. The League also fought to ensure that Mexican Americans had fair and equal access to Education and successfully challenged seggregation of Mexican Americans on several occasions, for example the cases of Mendez v. Westminster in 1945 and Minerva Delgado V. Bastrop Independent School District in 1948. In the 1960’s a new movement emerged, known as the Chicano Movement. This movement looked at land reform and participated in the Poor Peoples March on Washington in 1967. The Mexican American Legal Defense and Educational Fund was established in 1968. This was based on the NAACP model and worked in much the same way. The Chicano Movement were also involved in Student walk outs and protests about the Vietam War.

NCLR – The History of the National Council of La Raza, a Hispanic Civil Rights organisation.

Houton Culture – detailed article outlining the struggle to get equal rights for hispanic migrants to America.

lasculturas.com – series of links to articles about Mexican-American experiences and the civil rights movement.

City Data Forum – Discussion in a forum about how hispanics were treated during the 1960’s.

Albany.edu – review of the film Chicano.