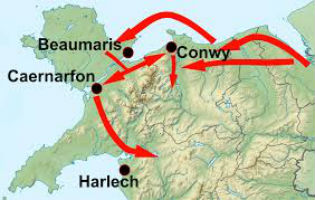 Edward I launched a series of campaigns in which the English conquered Wales. It led to the establishment of a series of English Castles around Wales and the beginning of the symbolic act of crowning the heir to England’s throne as the Prince of Wales. The Conquest followed war against Welsh princes of Gwynedd. Prior to Edward I’s accession the relationship between England and Wales had been mixed. A border was reasonably well defined by the Marcher Lords. The South Coast of Wales had much influence from the Normans. The North West, around Snowdonia, remained fiercely independent. This left central Wales as an area in which various lords sought to gain influence. Under the rule of Henry III in England, the princes of Gwynedd had increased their presence in this region. The fractious nature of Henry’s relationship with his barons meant that instead of the English nobility being in the ascendancy in this part of Wales, the Princes of Wales, from the north west, were.

Under John and Henry III’s reign the threat from Wales had become more pronounced. Llywelyn the Great had fought off English forces under John. Under Henry, Llywelyn was confirmed as the holder of authority in Wales. Yet whilst Wales grew stronger and more independent, it was also seeing a great level of English influence at court. Llywelyn himself had married a daughter of Henry III. Other nobles had made similar marriages for political reasons.

Two generations after Llywelyn the Greats achievement of securing authority, Wales had his grandson, Llywelyn ap Gruffudd as their ruler. He was master of more of Wales than any Welsh Prince had controlled since the coming of the Normans in 1066.

The death of Henry III presented Llywelyn with an opportunity. Wales paid homage to England. With that went a large payment. The grant of authority to Welsh Princes had been won by the sword. With a new king and the barons divided a new relationship could be forged between England and Wales. Llywelyn arranged to marry the daughter of Simon de Montfort. A shrewd choice given the families influence over English nobles. He also stopped paying homage to England.

The death of Henry III also presented an opportunity for the brothers of Llywelyn. They went to England in the hope of gaining more power through links with the English crown.

Edward I sent five summons to Llywelyn for payment of homage. Such payment was quite normal in Medieval times, Edward himself paid the king of France homage for lands he held in France. Llywelyn ignored each of the requests. Eventually, Edward lost his patience and prepared to force the issue.

A large army was put together by Edward. Interestingly, of the 15000 infantry, some 9000 of these were raised in Wales.

The Campaigns of Edward I in Wales:

1277: January to June. The first campaign saw small forces of English and Welsh troops under English command marching north from the south coast into the middle of Wales. This was the region adjoining the Marcher Lords. It was designed to reduce Llywelyn’s grip on the land. The lords here were, in general, quite sympathetic to the English cause and happy to have Edward rather than Llywelyn as ruler. The area quickly came under English control.

1277: July. Edward I himself leads an army from Chester into North Wales. He lays waste to Flint, Ruddlan and Deganwy.

1277: November. Treaty of Aberconwy. Recognises Edward as feudal overlord. Llywelyn retains title of Prince of Wales. Llywelyn retains West Gwynedd. East Gwynedd is divided between Edward I and Dafydd, Llywelyn’s brother. The South and centre of Wales become fiefdoms of Edward I.

1282: January-May. Dissatisfied with the amount of land that he received from the Treaty of Aberconwy, Dafydd begins raiding English held lands adjoining his. Llywelyn joins in this tactic. Soon there is open resistance to Edward’s occupation across much of Wales.

1282: June. Edward I responds to the insurrection with a four pronged assault on Gwynedd. English forces attack via Anglesey, the South, Central Wales and from the north coast.

1282: 17th June. The Welsh are victorious at the Battle of Llandelio Fawr.

1282: November. Llywelyn follows up the victory with an advance into Central Wales. This turns out to be a mistake.

1282. 11th December. The Battle of Orewin Bridge is a decisive English victory. Llywelyn is killed.

1283: January-June. Attacks into Snowdonia and Gwynedd from all sides drive back resistance from the Welsh. Dafydd is captured.

Wales is now effectively under English control. In the coming years a series of measures are introduced to ensure that Gwynedd would not pose another threat to Edward or English rule.

Castles are constructed. A ring of them remain standing around Snowdonia.

The lands are retained by the crown or the Marcher lords. There would be no squabbling over land rights.