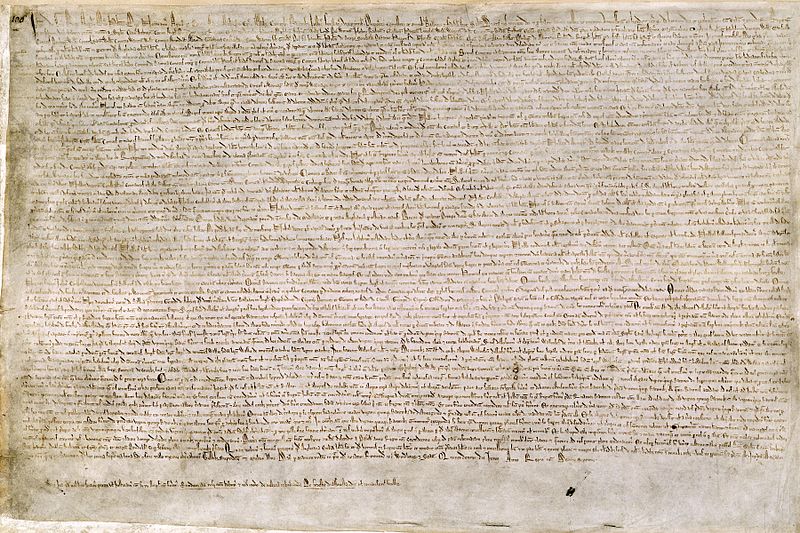 Magna Carta (The Great Charter) was signed by King John at Runnymede in 1215. The Charter set out the freedoms, rights and privileges for English law. It is significant as Magna Carta also subjects the monarch to the rule of law. The Charter was drawn up at a time when King John was fighting the baronial wars, who were supported by the French King, Louis. John is a much debated monarch. He was disliked by many of the chroniclers of the day because of his argument with Pope Innocent III. Therefore there is a bias that portrays him in an incredibly poor light. Modern Historians include some who identify him as actually being highly energetic and an excellent administrator. The reality is probably between the two extremes of interpretation.

John’s problems are well documented, see our biography of him for depth. The treasury had no reserves, the administration of the land was in tatters and his Norman lands were under threat. John had to deal with each of these issues as soon as he was king. Some of the problems were harder to deal with that others, for several reasons.

To improve administration, John would need to change the relationship of the treasury with the barons. The barons did not like this. The expansion of the Sheriff system threatened the authority of Barons and caused discontent among the peasants: though it was a more efficient system.

The problem of Normandy was a hard one. It was his families home. It had to be fought for. The barons had land their, he was expected to defend it and expand lands. Conflict there was historic, it was not of John’s making. However, John’s scheming whilst both his father and elder brother Richard had been in charge meant that trust in John’s leadership was low, financial backing for armies was lacking as was his own personal leadership and consequently results were poor.

As John looked to deal with these issues he had several routes he could take. Other monarchs both before and after him have altered the administration of England without causing upset. John did cause upset. His manner was curt and rude. He was perceived as being arrogant. Many of the barons found him intolerable and impossible to work with. This led to the Baronial War. Bolstered by the support, and likely encouragement, of Louis of France, a Civil War broke out between King John and his barons.

The treaty that brought this war to an end was the Magna Carta. Magna Carta is hugely significant and a massive break with the traditional treaties of the day. Normally an agreement would simply give land to one party, or money, or arrange marriages to keep a peace. This one, Magna Carta, wrote about freedoms.

There are 64 clauses in the original Magna Carta. Many deal with specific grievances of the barons and were significant then but less so now. Some though are still at the heart of the English Legal System today.

The rights of the City of London were guaranteed.

Another clause defends the freedom and rights of the Church in England.

Freemen were granted the right to a fair trial.

Others of relevance have been removed from law, adapted, then put back into law. These include:

Taxation could not be done without the consent of the realm. This is now taken to mean that Tax can only be imposed by an elected government. In 1215, it meant that the barons and bishops should be broadly in agreement with taxation policies.

Widows could no longer be forced to remarry against their will. Such had been commonplace and this is an early example of the rights of women being documented in English law.

Why did King John agree to these demands?

It was very unusual for a King to agree to such a long list of demands from his subjects. However, John had very little choice at that time. A French army had defeated the English and driven them from most of mainland Europe. This had cost a lot of money. John had overcome problems with the church as recently as 1213. In handing over overlordship of England to the papacy, he now found that the barons grievances were taken to the Archbishop of Canterbury and the Papal Legate and given a hearing. John. initially refused to discuss things. Then the barons started to renounce their oath of allegiance. They appointed a new leader. They occupied London.

John had no choice but to discuss terms. The terms, as above, were the Great Charter, Magna Carta.

There are three remaining copies of the original Magna Carta. Magna Carta was reissued in later Medieval reigns, especially relevant redrafting took place in the reign of Henry III, John’s successor. The British Library has an excellent series of resources on Magna Carta that provide a great deal of context. The Houses of Parliament website looks at the place of Magna Carta in the history of the British Constitution. The National Archives has an excellent six section resource on the Magna Carta that looks not only at its origins but also at the way it was used and developed in the rest of the 13th century.