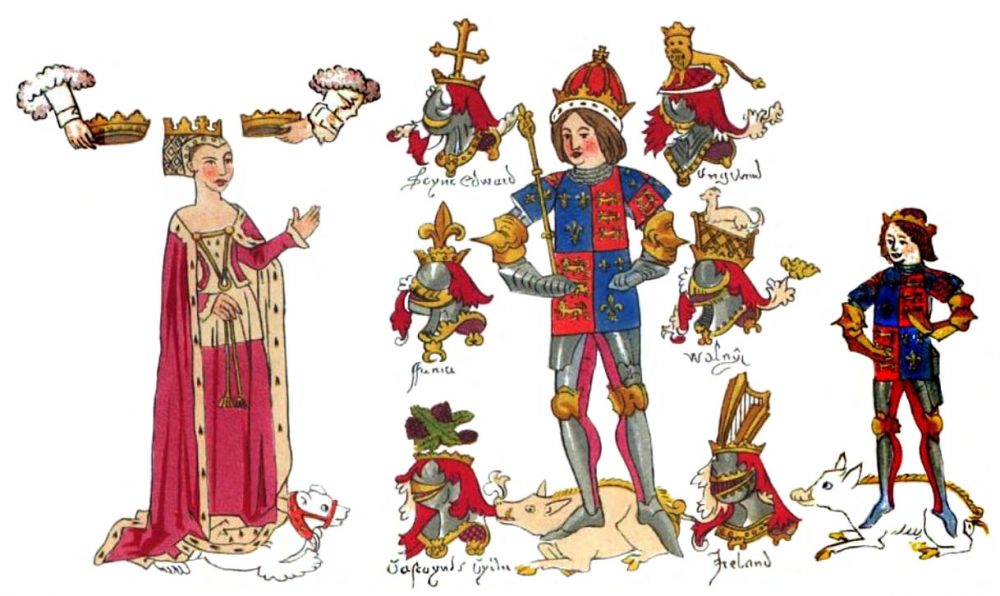 John Rous was a historian who lived from around 1420 to 1492. His work is notable as he wrote about contemporary events. This gives historians an insight into the views of people about the major political matters of the day. In particular, Rous’ work can be used to identify changing attitudes to Richard III. This makes his writing ideal for use in the classroom when looking particularly at the context in which things are written. Rous is also notable as providing  clues to the location of Richard’s remains. Rous’ writing began under the patronage of the Yorkists. He wrote histories that reflected their views. One example is the history of Henry V that he wrote. It mentions that he fought in France, it does not mention the success at Agincourt. Not one single word about the victory.

Rous also wrote a volume known as the “Warwick Roll” about the Beauchamp Family. This was the Earl of Warwick’s personal history. It contains vivid illustrations which may have been produced by Rous himself.

During the reign of Richard III, the “Rous Roll” was written. It remarks on many of the kings good qualities. At first, he is noted for being a mighty prince. It notes his bounteous grace and the noble act of granting Warwick a charter.

Rex Richardus tercius – born in the Castel of Foderiyngay a myghti prince in his dayes special gode lord to the town & lordship of Warrewyk wher yn the castel he did gret cost off byldyng In the which his most noble lady & wyf was born and at gret instance of her he of his bounteous grace with owt fee or fyn graunt to the seyd borowh frely by charter as kyng William Conquerour his noble progenitor a fore tym gret previlagis.

Furthermore, it talks about his leadership qualities. A good king kept law and order under control. Was firm, but fair. Rous has this to say about Richard:

The moost mighty prynce Rychard by the grace of god kynge of ynglond and of fraunce and lord of Irelond by verrey matrimony with owt dyscontynewans or any defylynge yn the lawe by eyre male lineally dyscendyng from kynge harre the second all avarice set a syde Rewled hys subjettys In hys Realme ful commendabylly poneschynge offenders of hys laws specyally Extorcioners and oppressors of hys comyns and chereschynge tho that were vertues by the whyche dyscrete guydynfe he gat gret thank of god and love of all hys subjettys Ryche and pore and gret lavd of the people of all othyr landys a bowt hym.

This roughly translates into saying that anybody who oppressed the people was punished. Richard’s law is highly commendable. The realm is well maintained. Rich and poor subjects thank god for him and give him all their love.

Rous is however best known for his Historia Regum Angliae. This was written during the reign of Henry VII. It paints a very different picture of Richard III. Here, Rous portrays Richard as a freak of nature. A man who spent two years in his mothers womb.

Richard was born at Fotheringhay in Northamptonshire, retained within his mother’s womb for two years and emerging with teeth and hair to his shoulders. …

Richard is described in vivid and angry language. He is deformed, has stunted growth and leans heavily to one side.

At his nativity Scorpio was in the ascendant, which is the sign of the house of Mars. And like a scorpion he combined a smooth front with a stinging tail.

In the space of a few years, Rous has changed his opinion of Richard rather dramatically. Now his birth been somewhat unusual and his appearance and demeanor to be frowned upon. Richard is being cast as a demon. The kind of demon who would murder innocent Princes.

He received his lord King Edward V blandly, with embraces and kisses, and within about three months or a little more he killed him together with his brother.

This is fairly damning. Richard is the epitome of evil. In fact, Rous actually goes so far as to say exactly that:

This King Richard, who was excessively cruel in his days, reigned for three years [sic] and a little more, in the way that Antichrist is to reign. And like the Antichrist to come, he was confounded at his moment of greatest pride

Yet when it comes to the death of Richard, he is contrite. Richard III, he says, was noble at the end.

he bore himself like a noble soldier and despite his little body and feeble strength, honourably defended himself to his last breath, shouting again and again that he was betrayed, and crying ‘Treason! Treason! Treason!

Rous became important once again some 500 years after his last breath. Rous noted the precise location of Richard’s resting place. It, along with other sources and evidence, led to those remains being discovered and reburied.

he ended his life miserably, and finally he was buried among the Friars Minor (Franciscans) of Leicester in the choir

For anyone, like myself, who has lived or studied in Leicester, this narrows the possibilities down no end. The Friars home and graveyard became disused during the Dissolution of the monasteries. Much of the area is now built upon. However it was possible to use maps from the time and historical knowledge about the Monastery to identify where his remains were most likely to be. Rous’s line narrowed the search down to a relatively small area.

7 thoughts on “John Rous and opinions of Richard III”

Home » Plantagenet » John Rous and opinions of Richard III
a