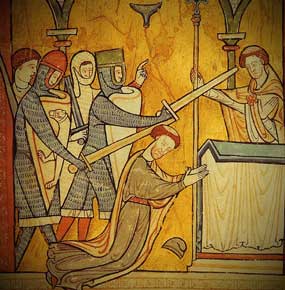 The Murder of Thomas Becket took place in Canterbury Cathedral on 29th December 1170. Four knights attacked and killed Becket, believing that they were acting on the wishes of King Henry II. Becket had previously been Henry’s Chancellor. After becoming Archbishop he protected the rights and status of the church. This disagreement with the King ultimately led to these four knights believing that the order had been given to “rid” Henry of Becket.

Thomas Becket had been a close friend of Henry II. He was promoted through the ranks to become Henry’s Chancellor. In this position, Becket excelled. He organised the treasury and was competent at collecting taxes. In 1161 Archbishop Theobald died. The see of Canterbury is hugely important within the Church in England. It amasses lots of wealth and has huge influence over English society. Henry wanted somebody as Archbishop who would work with him to make reforms. The reforms would reduce the rights of the church to have their own courts and punishments. This seems fair in modern eyes, a clergyman breaking the laws of the land ought to be punished by the courts of the land. This was not so straight forward in Henry’s time.

Becket didn’t agree with Henry on these matters. As a consecrated Archbishop his first duty was to God, then the Pope, then his King. This was an argument that had arisen throughout the Church in Norman England. Once more it caused problems. Becket’s refusal to make any changes led to him being forced into exile. Eventually, Henry and Becket reconciled with one another. The issue soon arose again though. Becket remained firm on his insistence that the church controlled church matters. Henry is reputed to have gone into a fit of rage at hearing this. The famous line, “who will rid me of this troublesome priest” is often quoted. The exact phrasing cannot be proven. Whatever was said, was heard.

Four knights heard Henry’s words and interpreted it as meaning that the king wanted Becket dead. They crossed the channel and went to Canterbury. They entered the Cathedral and sought out Becket. Monks from the chapter were brushed aside. Becket was confronted. According to some sources the knights, unarmed, insisted that he attended a court at Winchester to answer for his actions.

Becket refused and made his way to join the monks at Vespers. The knights left. The reprieve was not for long though. The knights had simply gone to retrieve their weapons that had been left outside of the Cathedral. They hurt a number of monks getting to Becket. Becket backed away from them but was corned. One of the monks who was injured later recorded what happened next:

The wicked knight leapt suddenly upon him, cutting off the top of the crown which the unction of sacred chrism had dedicated to God. Next he received a second blow on the head, but still he stood firm and immovable. At the third blow he fell on his knees and elbows, offering himself a living sacrifice, and saying in a low voice, “For the name of Jesus and the protection of the Church, I am ready to embrace death.” But the third knight inflicted a terrible wound as he lay prostrate. By this stroke, the crown of his head was separated from the head in such a way that the blood white with the brain, and the brain no less red from the blood, dyed the floor of the cathedral. The same clerk who had entered with the knights placed his foot on the neck of the holy priest and precious martyr, and, horrible to relate, scattered the brains and blood about the pavements, crying to the others, ‘Let us away, knights; this fellow will arise no more.”

Becket was dead. Murdered in his Cathedral.

The Four Knights fled north after assassinating Becket. They left England for Rome around a year after the assassination. Here they begged the Pope for forgiveness. They became long term Crusading Knights as a result of this. None of them had lands or titles stripped in England.

Henry II was horrified when he heard of the killing. He publically prayed for his old friends soul and paid penance for his sin. Becket’s sister was made an Abbess in lieu of the families loss.

Becket was made a Saint in 1173. His remains were buried underneath the crypt of the Cathedral to prevent his remains being interfered with. In 1220 they were reburied and his tomb remains in Canterbury Cathedral as a place of pilgrimage.