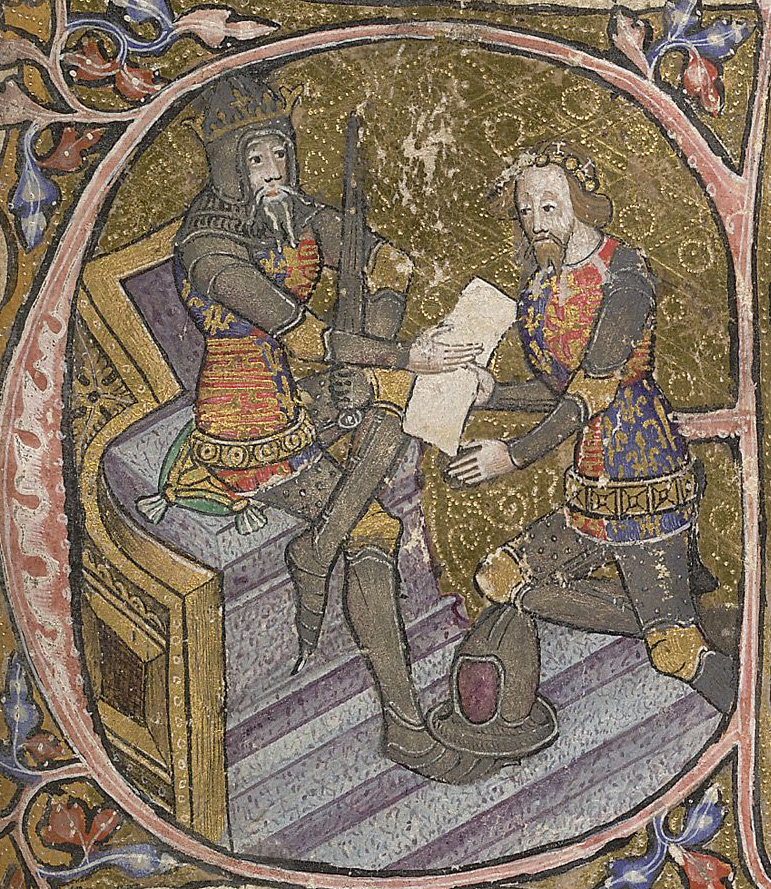 On 25th January 1327, Edward II was deposed in favour of his son, Edward III. Edward III was crowned days later, aged 14. His reign began with his mother and Lord Mortimer acting as regents. Following his assertion of power, Edward III went on to become a great medieval leader. Campaigns in France began the hundred years war; in Scotland he set about correcting the mistakes of his father. His reign was a long one, lasting until 1377. His reign saw changes to Parliament; altered relationships with Scotland and in Europe. The Black Death wreaked havoc during Edward III’s reign, changing English society and posing administrative challenges for his parliament. Edward soon wrestled off the control of his mother and her lover, Mortimer. In 1330 Queen Isabella, his mother, was sent to France. Mortimer, was executed. Edward was now ruling the country in his own right. He had much to put right. Barons remained aggrieved about the rise of favourites under Edward II and issues relating to the Scots and lands in France were unsettled.

The issues of Scotland, disinheritance and disgruntled barons combined to present a problem in 1332. Lords who had lost lands as a result of the failures in Scotland of Edward II decided to take action. They invaded Scotland. These lords won a victory at Dupplin Moor, following which they wanted to overthrow King David II and replace him with Edward Balliol.

Edward Balliol was unable to secure his claim and asked Edward III for assistance. Edward sent an army which succeeded in gaining territories and for some time allowed Balliol to rule. However, such campaigning was expensive and after several years a truce was drawn up: with David II as king. The truce prevented additional expense in Anglo-Scottish wars but was also politically expedient. By the late 1330’s it was growing hard to sustain forces against Scottish raids. It was also the case that funds needed to be prioritised for likely conflict with France.

The cost of war was frowned upon by the Royal Council. Edward III was forced to concede to some concessions to the Council in order to get new taxes granted. Unlike in some other situations where the Council assumed dominance, Edward simply bade his time and then cast off the agreement with Council, ruling with near absolute authority for most of his reign.

During Edward III’s campaigns in France, great English victories were won at Crecy, Calais, Sluys (Sea Battle) and Poitiers. The French King, John II, was held captive in England. Edward was close to becoming crowned King of France in Reims, the traditional seat of French coronations, or Paris. However, a freak hailstorm killed 1000 men of the English army and Edward opted to agree a peace with the French.

These victories are all the more remarkable as they lay either side of the coming of the Black Death. This plague hit England in 1349 and spread widely through people of all classes. The Black Death killed many villeins, tied to the land under their feudal lords. This meant that there was a change in the labour market as many lords had land but no farmers. Ties to the land were open to challenge and free men were able to charge high prices for their labour. Edward III and his leading ministers came up with a short term solution to the problem. The Statute of Labourers fixed rates of pay. This prevented wage inflation and ensured that the English economy could recover from the disaster that was the Black Death. The Statute was rigorously enforced.

Under Edward, Parliament continued to develop and mature. The complex financial issues caused by ongoing wars meant that new, steady and reliable, streams of income were needed. Parliament began to split into what we now know as the Lords and the Commons. A Speaker was introduced and a means of impeaching was established. The lower house was responsible for elements of ongoing revenue collection. This took the form of the ordinance of the Staple, 1353, concerning customs and excise duties.

Following the Black Death the court was dominated by younger nobles. Some aristocracy had died as a result of the Black Death, others of other causes. The influence of Edward’s sons grew as a result. In his latter years much of the work of Government was handed to trusted advisors and to the Princes. His eldest son, known as the Black Prince, was well liked, courageous and very able. However, he succumbed to ill health in 1376. When Edward II died the following year, Richard, son of the Black Prince, was crowned King Richard II.