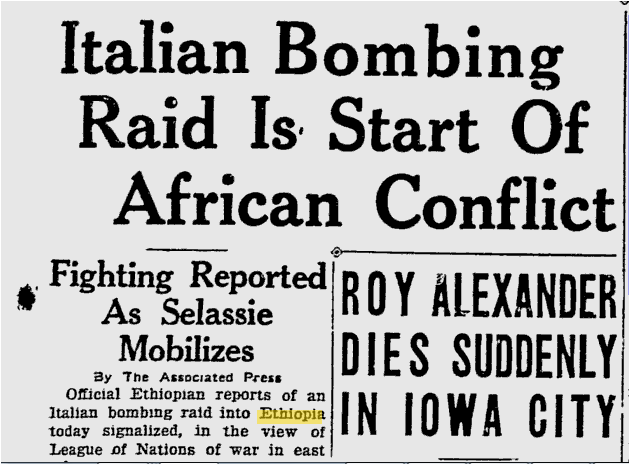 The Abyssinia Crisis 1935-1936 was sparked by the Wal Wal Incident. Italy had expanded her area of influence in Africa by building the Wal Wal Fort in Abyssinian territory in 1930. In 1934 a skirmish as Abyssinian troops attempted to take control of the fort. The League of Nations was used to create a neutral zone in the area and sanctions were imposed following an escalation in skirmishes. Despite Italian forces entering the neutral zone, forces of League of Nations members did nothing to prevent Italian aggression: the British moved the fleet effectively enabling Italian supply of Italian aggression. In the early 1930’s Italy’s population was growing steadily. The Italian leader, Benito Mussolini, was eager to increase the size of the Italian empire. He wanted to increase the empire for several reasons. Firstly, an expanded empire would provide much needed raw materials needed to help Italian Industry and military expansion. Secondly an increased empire would send out a clear message of strength and add to national prestige. Thirdly, expansion would provide land for the expanding population to live in.

Italy already held several colonies in Africa. Eritrea on Africa’s eastern coast was an Italian colony, as was Libya on the Mediterranean coast. Expansion of the empire would almost certainly be a breach of international agreements: Italy had signed the Kellogg-Briand pact which denounced warfare and as a member of the League of Nations was forbidden to act aggressively against another member nation. Legally therefore such expansion could only really be achieved through effectively taking control of an areas economy making it dependant on Italy.

By 1935 Mussolini was eager to go to war. He wanted glory and now needed additional raw materials for Italian Industry. Abyssinia had Raw Materials and was conveniently located next to Eritrea, part of the Italian Empire. Buoyed by the failure of the League of Nations to deal with the Japanese invasion of Manchuria and reports that neither France or Britain were wiling to go to war in defence of Abyssinia, he began preparations for an invasion.

On November 22nd 1934 an Ethiopian force of some 1000 men arrived at the fort at Wal Wal and demanded that the fort be handed over to them. The garrison commander refused. The risk of armed conflict seemed to die down when and Anglo-Ethiopian border commission arrived at the fort the following day. Tensions however remained. On December the 5th/6th there was a skirmish between the Abyssinian and Italian forces, both sides blaming the other for the fighting.

Reactions to the Wal Wal Incident

Both sides demanded apologies and protested about the actions of the other. The emperor of Ethiopia then appealed to the League of Nations for help. However the League decided that no penalties should be applied to either party at this time. The main reason for this is perhaps because of ongoing diplomacy behind the scenes. The French and British were eager to maintain good relations with Italy and after the Ethiopian appeal to the League had sent their respective foreign Ministers to Rome to meet with Mussolini. At the meeting agreements were made that cemented Italian authority in Tunisia and granted Italy lands previously in French Somalia. This would hopefully buy Mussolini’s friendship whilst also easing the tension over Wal Wal and Abyssinia.

The hoped for peace did not last long. On January 25th the Ethiopian army killed 5 Italian soldiers near the base at Wal Wal. Mussolini’s response was to mobilise two divisions in the area and preparations began to send a large military force to the area. Ethiopia asked the League of Nations to arbitrate over the issue and noted the large numbers of Italian forces arriving in Eritrea and Italian Somaliland. Italy agreed to a neutral area along the border but continued to send more forces to to the area. Ethiopia again asked the League of Nations to intervene.

In June Britain sent Under Secretary for Foreign Affairs, Anthony Eden, to try and broker a deal with Mussolini that would prevent war. Mussolini though was not in any mood to back down though. An arms embargo was placed on both Italy and Ethiopia, but Britain also withdrew the Royal Navy from the Mediterranean which effectively enabled Italian ships to supply a war. Through the summer there were discussions at the League of Nations and negotiations that might pacify Mussolini. In September the League of nations decided that neither side were to blame for the incident at Wal Wal. Sanctions and the arms embargo were now reduced.

On October 3rd 1935 Italian troops invaded Abyssinia from Eritrea and Italian Somaliland. The League of Nations stated that Italy were the aggressors and imposed limited sanctions – they failed to place sanctions on Oil which was needed to enable the continuation of war. Sanctions were not increased or universally applied, even after it emerged that Italian forces were making use of Chemical weapons against civilians. Instead of imposing sanctions the British and French foreign ministers came up with the Hoare-Laval Pact. This pact would end the war but would grant Italy large areas of Abyssinia. When news of the plan was leaked to the press there was a public outcry and both men resigned and it was not implemented. The war continued until May 1936, when Abyssinia became part of the Italian Empire.