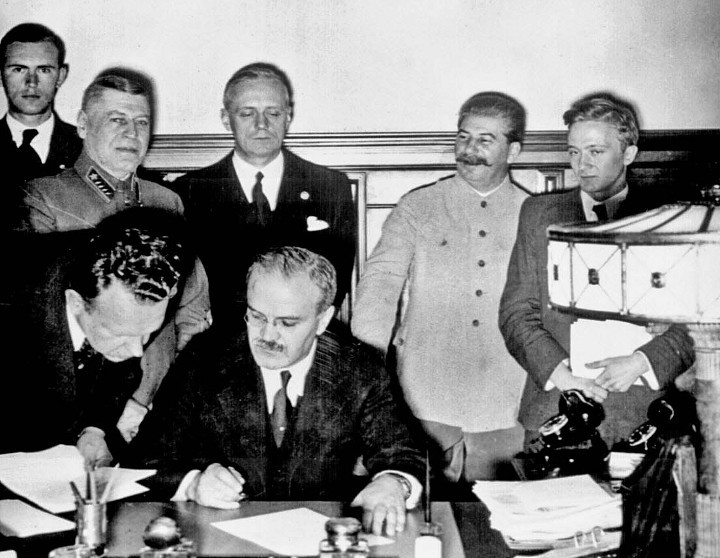 The Nazi-Soviet Pact was agreed in 1939. |The result of a meeting between Ribbentrop and Molotov, it agreed no conflict between the two nations. It also agreed that Poland would be divided between Germany and the Soviet Union. The Pact followed the failure of talks between the USSR and the Western Powers. As Appeasement continued it became clear to Joseph Stalin that there would be a war in Europe. In April 1939 he made his attempt to minimise the risk to the Soviet Union. He called for an anti-fascist alliance between the USSR, Britain and France. The logic was that Hitler would not be willing to invade Poland if faced with the prospect of a war on two fronts against 3 major powers. Whilst some in Britain agreed that this was the most likely way to avoid war, Winston Churchill amongst them, the alliance never materialised. Negotiations with the West failed for 3 reasons. Firstly, Neville Chamberlain was reluctant to do business with the Communists. He didn’t like them, nor did he trust them. Secondly, the Polish government refused to allow Soviet Forces into Poland making it hard for the USSR to counter any German invasion and finally Stalin, having seen the British and French reactions to the Sudetenland Crisis, did not believe that the western powers would enter into a war if called upon.

When it became clear that he could not get an agreement with Britain and France, Stalin considered his options. He was now convinced that war was inevitable but knew that his armed forces were not prepared for a sustained conflict at this moment in time. At the same time, Hitler was planning for his invasion of Poland. In August 1939 Ribbentrop visited Moscow for a meeting with Molotov, the newly appointed Soviet Minister for foreign affairs. Ribbentrop proposed a non aggression pact with the USSR.

The Pact promised that both sides would remain neutral in the event of the other becoming involved in a war. In secret clauses of the pact there was also an agreement as to spheres of influence in eastern europe. Poland was to be split down the middle under this arrangement.

Why did Stalin agree to the Pact?

Stalin was convinced that war was about to break out. His options were to continue negotiations with Britain and France, which had been floundering for month and that offered no guarantee of military support should war break out in Eastern Europe. Or he could sign the pact with Germany and get half of Poland straight away. The second option also provided Stalin with time to rearm for a German invasion of the Soviet Union, which he believed was incredibly likely to happen at some point.

Why did Germany offer the Pact to the Soviet Union?

Hitler feared a war on two fronts. He recalled how difficult it had been to fight in both the East and West during the First World War and was desperate to avoid this happening again. He wanted to ensure that when Poland was invaded that the Soviet Union would not intervene, thus making the invasion a much easier task and allowing the Wehrmacht to quickly complete the invasion and prepare to deal with the British and French response.

Source 1: Winston Churchill advocating an alliance with the Soviet Union, May 1939.

The Government must realise that none of these States in Eastern Europe can maintain themselves for, say, a year’s war unless they have behind them the massive, solid backing of a friendly Russia, joined to the combination of the Western Powers. In the main, I agree with Mr. Lloyd George that if there is to be an effective eastern front – an eastern peace front, or a war front as it might become – it can be set up only with the effective support of a friendly Soviet Russia lying behind all those countries.

Source 2: Joseph Stalin explaining the reason for signing the pact.

Of course, it’s all a game to see who can fool whom. I know what Hitler’s up to. He thinks he’s outsmarted me, but actually it’s I who have tricked him.