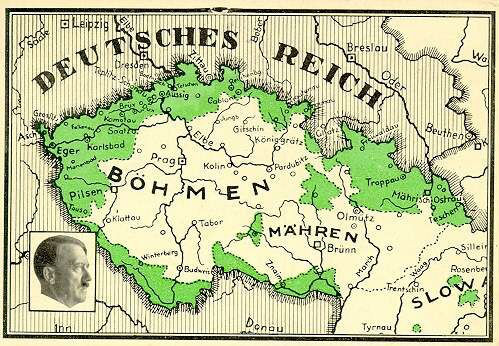 Sudetenland was an area of Czechoslovakia that had a majority of ethnic Germans. These people, encouraged by the Nazi Party of Germany, wanted to become part of the German state. In 1938 the Sudeten Nazi Party began agitating for a plebiscite on the issue. As unrest began, German forces were moved into positions along the border. Diplomacy intervened to prevent the Wehrmacht from entering Czechoslovakian territory. The Munich Agreement ceded Sudetenland to Germany.

Sudetenland was a region that was ethnically German. Prior to the first world war the region had been part of the Austro-Hungarian Empire. The Peace Settlements placed the region within the newly created state of Czechoslovakia. The bulk of people in Czechoslovakia were Czechs or Slovaks. The Sudeten Germans did not like being the minority group and wanted to be in a German speaking nation.

In 1931 a Sudeten German Party was formed. This party had one main aim: to bring the region under the control of Germany. It organised protests and gained a lot of support from Sudeten Germans. Once Hitler was elected, he funded the party and it grew in size and strength.

Following the Anschluss, Hitler was now close to achieving his objective of Grossdeutschland. Incorporating Sudetenland into Germany would go a long way towards fulfilling this aim. Hitler told the Sudeten German Party to begin a programme of unrest and to make their demands for a plebiscite known to the Czech Government. In April of 1938 this led to the party announcing a plan for Sudeten self government and the civil unrest grew in intensity. The Sudeten claimed that they were being persecuted and German newsreels backed up this assertion. Throughout the summer there was a tense stand off between the German and Czech governments. Hitler assured the International Community that all he wanted was for the ethnic Germans to get what they wanted and join Germany. Further rioting took place throughout the Sudetenland and martial law was imposed by the Czech government. It now looked as though Hitler was about to invade. As a consequence of the heightened tension international diplomacy ensued with Neville Chamberlain leading the negotiations with Hitler, which culminated in the Munich Agreement which ceded Sudetenland to Germany.