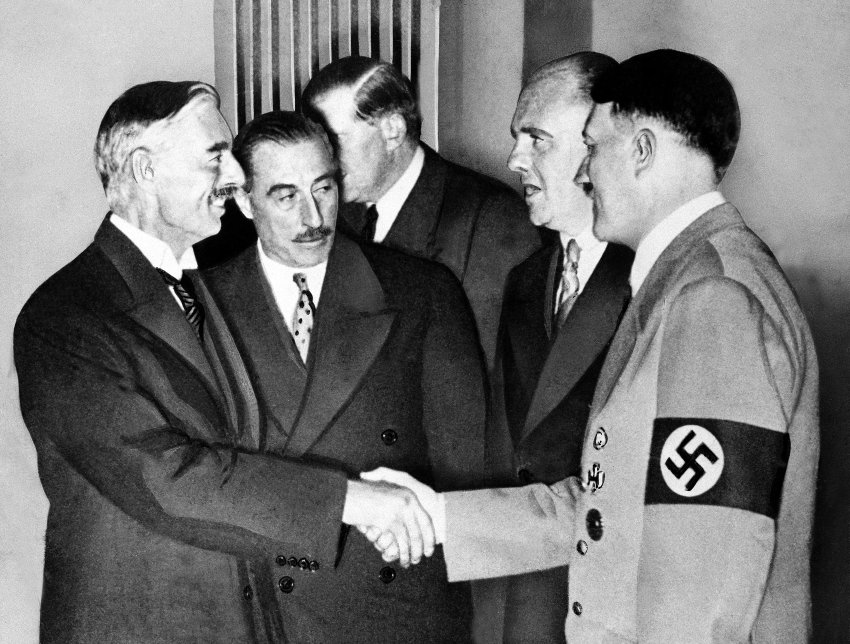 Appeasement is the name given to the policy of major powers, particularly Great Britain, towards Nazi Germany. The policy of Appeasement looked to make compromises with Germany that would prevent, or delay, a war. Neville Chamberlain’s policy has been criticised as being a failure by some. Others note that the policy was supported by the majority or that it was quite deliberately delaying the inevitable war that followed.

What were the aims of and reasons for Neville Chamberlain’s policy of Appeasement?

The main aim of Neville Chamberlain’s policy of appeasement was to maintain peace. He, and most people at the time, remembered the horrors of the First World War and wanted to prevent it happening again. However, it’s not as simple a case as saying ‘we’ll do anything to prevent war’. The reasons why Appeasement was adopted as a policy:

First and foremost the British people and most politicians did not want to go to war, they were quite happy to negotiate issues. In particular they saw little wrong with many of the things that Hitler wanted. His government was widely admired at the time, being strong and acting as a buffer zone against Communist Russia.

The League of Nations was in place to deal with disputes such as the things that Hitler was demanding and doing. Under the covenant of the League armed responses should be the result of a unanimous vote by the League’s council. By the mid 1930’s it was clear that this would not happen, too many League of Nations member nations simply were not willing to fight, or could not afford to do so.

It is important to remember that these issues were being looked at in the middle of the Depression. Millions were unemployed in Britain and similar economic problems existed across Europe. This has two impacts on policy. First, it requires military spending to be kept down. Rearmament and an aggressive Foreign Policy is incredibly expensive and public and political pressure is in place to spend what funds there are available on Social issues. Secondly, it affected the way that some issues were viewed. German conscription was no different to the policies other nations were putting in place to keep unemployment down and an element of German Rearmament would help a) stabilise the German economy and b) help to secure Europe from the threat of Communism.

Lots of the things that Hitler asked for seemed quite reasonable. For example: German people in the Saar region wanted to live in Germany, plebisites proved this, whats unreasonable about allowing it to happen?

Britain wasn’t in a position to wage war in Europe and maintain the security of the Empire. The armed forces were not large enough or well enough equipped to cope with these twin demands. Also by the time Appeasement was adopted as a policy it was known, as a result of the Spanish Civil War, that the German Luftwaffe could wreak havoc on British cities should war be declared.

“However much we may sympathize with a small nation confronted by a big and powerful neighbor, we cannot in all circumstances undertake to involve the whole British Empire in war simply on her account. If we have to fight it must be on larger issues than that. I am myself a man of peace to the depths of my soul. Armed conflict between nations is a nightmare to me; but if I were convinced that any nation had made up its mind to dominate the world by fear of its force, I should feel that it must be resisted. Under such a domination life for people who believe in liberty would not be worth living; but war is a fearful thing, and we must be very clear, before we embark upon it, that it is really the great issues that are at stake, and that the call to risk everything in their defense, when all the consequences are weighed, is irresistible.”

“Although there was much in the Nazi system that profoundly offended British opinion, I was not blind to what he (Hitler) had done for Germany, and to the achievement from his point of view of keeping Communism out of his country.”

“A firm stand by France and Britain, under the authority of the League of Nations, would have been followed by the immediate evacuation of the Rhineland without the shedding of a drop of blood; and the effects of that might have enabled the more prudent elements of the German Army to gain their proper position, and would not have given to the political head of Germany the enormous ascendancy which has enabled him to move forward. Austria has now been laid in thrall, and we do not know whether Czechoslovakia will not suffer a similar attack.”

“On the one hand, reports are daily received in great numbers, not only from official sources but from all manner of individuals who claim to have special and unchangeable sources of information. Many of these (and of such authority as to make it impossible to dismiss them as unworthy of attention) declare positively that Herr Hitler has made up his mind to attack Czechoslovakia and then to proceed further East. He is convinced that the operation can be effected so rapidly that it will be all over before France or Great Britain could move.

On the other hand, Your Majesty’s representative in Berlin has steadily maintained that Herr Hitler has not yet made up his mind to violence. He means to have a solution soon – this month – and if that solution, which must be satisfactory to himself, can be obtained peacefully, well and good. If not, he is ready to march.

In these circumstances I have been considering the possibility of a sudden and dramatic step which might change the whole situation. The plan is that I should inform Herr Hitler that I propose at once to go over to Germany to see him. If he assents, and it would be difficult for him to refuse, I should hope to persuade him that he had an unequalled opportunity of raising his own prestige and fulfilling what he has so often declared to be his aim, namely the establishment of an Anglo-German understanding, preceded by a settlement of the Czechoslovakian question.”