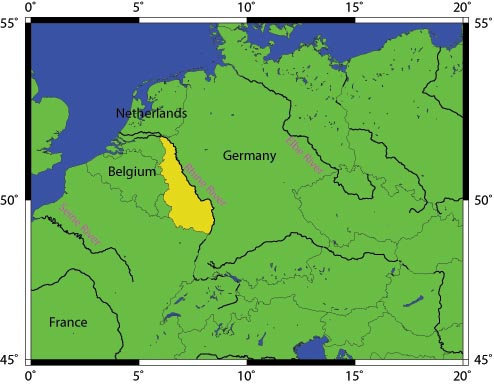 In 1936 German forces marched over the River Rhine into the Rhineland. The Rhineland was designated a demilitarised zone by the Treaty of Versailles. Reoccupation of the area was  a breach of the Treaty and of further Treaties such as the Locarno Pact. For Hitler and the Nazi’s the reoccupation was a propaganda opportunity; it also tested the resolve of the major powers. The response was muted. France had previously occupied the zone due to late reparation payments, on this occasion they expressed dismay but passed the matter to the League of Nations.

What was the International response to the re-occupation of the Rhineland?

What was the significance of the Rhineland?

The Rhineland is an area of Germany that borders France. It is of economic importance and militarily is considered strategically significant. For these reasons the Rhineland had been classified as a demilitarised zone in the Treaty of Versailles: to ensure that there was a military free area between Germany and France which would prevent the future build up of armed forces. The purpose of the zone therefore being to help guarantee future peace. The demilitarised zone was reaffirmed in the Locarno Pact and also in US-German treaties. Why did Hitler want to re-occupy the area?

The fact that German troops were not permitted into the Rhineland was quite humiliating. Though Germany had economic and Political control of the area the fact that they couldn’t do as they pleased in their own country was something that frustrated many. By re-occupying the Rhineland Hitler could achieve several things. First, it would be a huge boost to national morale and a propaganda victory within Germany. Second, it would demonstrate that International opinion about some terms of the Treaty of Versailles had changed, or at least that the Allied Powers were unwilling or unable to take action should Germany take steps to alter or ignore certain conditions of the peace settlements and later treaties.

What orders did the German Troops have? Why?

On March 7th, 1936, 3 battalions of men from the Wehrmacht were ordered to cross bridges over the River Rhine and re-occupy the demilitarised zone. They had strict instructions to immediately and peacefully evacuate should there be any military response from the French armed forces. Hitler outlined what had been ordered to the Reichstag that day:

“First, we swear to yield to no force whatever in the restoration of the honor of our people, preferring to succumb with honor to the severest hardships rather than to capitulate. Secondly, we pledge that now, more than ever, we shall strive for an understanding between European peoples, especially for one with our Western neighbor nations…We have no territorial demands to make in Europe!…Germany will never break the peace.”

Hitler knew that he was taking a risk. This was a clear breach of the terms of the Treaty of Versailles and whilst reasonably confident that the plan would succeed he later admitted that the 48 hours after the first troops marched into the area were amongst the most nervous moments of his political career. Had France responded, he would have looked foolish.

What was the German justification for breaking the Treaty of Versailles and Locarno Pact?

Hitler spoke in the Reichstag on March 7th, 1936. In his speech he justified the Re-Occupation of the Rhineland:

“Men of the German Reichstag! France has replied to the repeated friendly offers and peaceful assurances made by Germany by infringing the Reich pact though a military alliance with the Soviet Union exclusive directed against Germany. In this manner, however, the Locarno Rhine Pact has lost its inner meaning and ceased i practice to exist. Consequently, Germany regards herself, for her part, as no, longer bound by this dissolved treaty. The German government are now constrained to face the new situation created by this alliance, a situation which is rendered more acute by the fact that the Franco-Soviet treaty has been supplemented by a Treaty of Alliance between Czechoslovakia and the Soviet Union exactly parallel in form. In accordance with the fundamental right of a nation to secure its frontiers and ensure its possibilities of defense, the German government have today restored the full and unrestricted sovereignty of Germany in the demilitarized zone of the Rhineland.” Adolf Hitler.

What was the reaction of other countries to the re-occupation of the Rhineland?

The French viewed the de-militarised zone as a crucial part of their security. It enabled them to easily occupy the Ruhr Valley in the case of probable German agression and was, to them, one of the most important clauses of the Treaty of Versailles. The Re-occupation of the Rhineland also meant that the Germans were likely to construct defences, making French pledges to Eastern European nations harder to fulfil should the need arise.

“. . what had been violated was a treaty into which Germany had freely entered. It was a violation of a territorial character, a violation following upon repeated assurances by the German Chancellor [Hitler] that he would respect the Locarno Treaty and the demilitarized zone on condition that the other parties did the same. It was a violation committed in the very middle of negotiations . . .

If such violations were tolerated by members of the League as a whole, and in particular by the Locarno Powers, there was no basis for the establishment of international order, and no chance for the organization of peace through a system of collective security under the Covenant (of the League of Nations).

France would therefore ask the Council of the League to declare that there had been a breach of articles 42 and 43 of the Treaty of Versailles [decreeing demilitarization of the Rhineland]. As to the fact of this breach, there could be no possibility of doubt.

Once the breach had been declared by the Council, the French Government would put at the disposal of the Council all their moral and material resources (including military, naval and air forces) in order to repress what they regarded as an attempt upon international peace. The French Government expected that the Locarno Powers, in virtue of their formal obligations to render assistance, and the other members of the League . . . would act with the French Government in exercising pressure upon the author of this action.

The French Government did not by this mean to indicate that they would refuse in the future to pursue negotiations with Germany on questions interesting Germany and the Locarno Powers; but that such negotiations would only be possible when international law had been re-established in its full value . . .” M Fladdin, March 10th, 1936.

What this means in reality is that they are passing the issue to the League of Nations to deal with. Why? Some early histories of the crisis suggested that it was because France was psychologically unwilling to wage, or risk, war. However declassified documents show that the reasoning behind this action is less to do with the will of the French government and more to do with political necessity. France was about to hold a General Election and was suffering major financial problems. The French Military advised that a full mobilisation would be required if forces were to be sent into the Rhineland: as provision would need to be made for a German response to any military action. This simply wasn’t affordable so the French adopted a public attitude that it was down to the League to decide and that they would support whatever actions were seen fit by the League.

“…the feeling in the House [of Commons] is terribly pro-German, which means afraid of war.” H Nicholson, British MP.

“…no more than the Germans walking into their own backyard.” Lord Lothian

The British reaction was to propose talks with Hitler over the Rhineland region: something they had already proposed to hold in any case. There was dismay at the fact that Hitler had chosen to act, in breach of Treaty requirements, but no desire to go to war over the issue. The two quotes above sum up the general attitude towards the issue. What the Government proposed therefore was negotiation with the Germans over the size of any force which could be deployed in the Rhineland.

“We must discourage any military action by France against Germany. A possible course which might have its advocates would be for the Locarno signatories to call upon Germany to evacuate the Rhineland. It is difficult now to suppose that Herr Hitler could agree to such a demand, and it certainly should not be made unless the Powers, who made it, were prepared to enforce it by military action. Fortunately, M. Flandin [French Foreign Minister]has said that France will not act alone but will take the matter to the Council [of the League of Nations]. This he must be encouraged to do. But we must beware lest the French public, if further irritated or frightened, get restless at such a slow and indecisive action and demand retaliatory action of a military character such, for instance, as the reoccupation of the Saar [German territory ceded to France by the Treaty of Versailles and returned to Germany in 1935]. Such a development must be avoided if possible.

While we obviously cannot object to the Council adopting . . . a ‘finding’ that Germany has violated the demilitarized zone provisions, this ought to be on the distinct understanding that it is not to be followed by a French attack on Germany and a request for our armed assistance under that article. . . .

We must be ready at the Council to offer the French some satisfaction in return for their acquiescence in this tearing up of articles 42 and 43 of Versailles [i.e., demilitarization of the Rhineland] and of the whole of Locarno. . . . . In the face of this fresh and gross insult to the sanctity of treaties, it will be difficult to persuade the French to sign any fresh agreement with Germany in present circumstances. . . .

We might agree to [M. Flandin’s suggestion of a formal condemnation by the Council of Germany’s action], but we ought to resist [measures that could include economic and financial boycott] . . . The essential thing will be to induce or cajole France to accept [negotiations with Germany]. The trouble is that we are in a bad position to browbeat her into what we think reasonableness, because, if she wishes to do so, she can always hold us to our Locarno obligations and call upon us to join with her in turning the German forces out of the Rhineland. The strength of our position lies in the fact that France is not in the mood for a military adventure of this sort. . .”