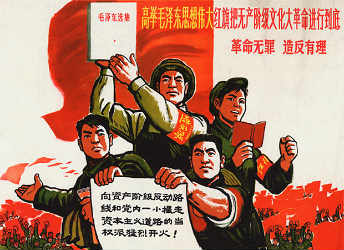 Chairman Mao was one of the most influential leaders of the twentieth century. Leading China from 1949 until his death in 1976, Mao oversaw a large number of changes in Chinese Society. From a war torn country where crime was rife and education limited to a player on the world stage. Here we look at the key elements of China and Communism under Mao. This is an area taught by some schools as an optional part of a GCSE in History.

Mao in the Chinese Civil War

Mao was born in December, 1893. His first political acts were as a founder member of the Chinese Communist Party. When the party became involved in a Civil War with the Nationalists, it was Mao who took a lead in establishing the Chinese Workers and Peasants Red Army. Mao based the army on Socialist ideals as seen in the Soviet Union. The Civil War saw the Communists forced into retreat. Nationalist leader, General Chiang Kai-shek, encircled them in Jiangxi province. Mao was removed from his position as local party chairman. The military defeats that followed this were shattering. After managing to hold off the Nationalists four times, the Communists knew that the fifth assault could shatter them. They were encircled and now their enemy were dug into strong positions. In October 1934 they broke out. 85000 men exploited a weak spot in the Nationalist lines and made it into open land. They then set off on a year long, cross country, Long March. In October 1935, they arrived at their destination. Mao was firmly established as their leader and now they had a heroic tales about the Long March to inspire the masses.

Fighting continued with the Nationalists until the Sino-Japanese War broke out. From 1937-1945 China was embroiled in war with Japan. The Japanese occupying large tracts of land spreading across China. The fighting was bitter. The Chinese deployed suicide bombers to hurl themselves underneath enemy tanks. The war came to an end with the Japanese surrender to Allied forces in August, 1945. Chinese involvement is often forgotten about in our histories. They fought numerous battles in the most horrendous conditions. The war enabled the Communists to gain support as they demonstrated that they practised what they preached.

Mao’s vision was for a socialist state. The Communists had promised land reforms. These were quickly introduced. Farming was collectivised but each peasant family also received land upon which they could farm. While this was of value to the poorest peasants, it attracted opposition from landowners and those who had been relatively well off in pre-collectivised farms. The response of Mao’s government was harsh. Opponents were sent to prison camps or executed. What were the consequences of Mao’s social policies?

Industry in China was behind other countries. Mao recognised that to survive, it had to catch up in key areas. To do this a Five Year Plan was introduced. Modelled on the Soviet system it set targets for core parts of the economy. The success of the earlier Five Year Plans is often debated by historians. The 2nd such plan, known as The Great Leap Forward, is believed to have caused the deaths of tens of millions of people.

With levels of dead such as these it would be easy to imagine that dissent was frowned upon and criticism of the state banned. This was not actually the case. The Hundred Flowers Movement started by Mao was designed entirely to prompt discussion and debate about issues. There are some suggestions that this was an attempt to reinvigorate the Arts but the short lived campaign saw debate on many issues. Throughout all of the changes, Mao was trying to instill a set of beliefs. To bolster these beliefs the Cultural Revolution was launched. Here, Mao became the centre of a Cult of Personality much like that seen under Stalin in the Soviet Union. The Cultural Revolution also saw many people being challenged about their beliefs. It led to fear and much violence. One of the best remembered features of the Cultural Revolution was the mass production of Mao’s Little Red Book. There are stories of people carrying several copies of this to show guards as a sign of their devotion to Mao and belief in the cause.

China versus the world?

China under Mao was for the most part an isolated country. Following the death of Stalin, Mao viewed most socialist countries with some disdain. On one occasion he noted that the only other true Socialist nation was Albania. Stalin had been somebody he admired, yet De-Stalinisation was taking place in the USSR and across Eastern Europe. Mao didn’t trust the United States. They had financed his enemies in the Civil War; fought against Chinese Troops in the Korean War and were engaged in wars against Communism in Vietnam. The mistrust of both the USSR and USA led to China being more determined to be self sufficient, hold a surplus of food and be militarily capable and ready. To demonstrate their capabilities they became the 5th Atomic Power in 1964.

China’s emergence from international isolation came as a result of a worsening in Sino-Soviet affairs. Border disputes between China and the Soviet Union became so tense that for seven months there was a state of high alert. China expected a Soviet attack. The border was so long that it was impossible to predict where it may occur. The Soviet Union had a large stockpile of Nuclear Warheads: 15 minutes flying time from the major centres of Chinese population.

The Chinese now viewed the Soviet Union as a bigger threat than the United States. This helped to improve relations with the West. Henry Kissinger paid a secret visit to China. This was followed by diplomatic visits, including an invitation for the US Table Tennis team to visit China. This, called Ping Pong Diplomacy, was the first time since the end of the Second World War that US Citizens had been welcomed into China. China quickly entered diplomatic circles. The United States recognised the Communist Government. China was admitted into the United Nations and given a seat on the Security Council.

The Gang of Four

Mao’s rule was not without opposition. Within the party there were a number of purges. Prospective leaders often found themselves imprisoned and in one case possibly assassinated by the state. A ‘Gang of Four’ emerged as a force within the party in Mao’s later years. Headed by Mao’s wife, Jiang Qing, they were politburo members who controlled the most important departments within Government. Their influence was huge though it is not always clear whether it was they or Mao who made some of the most contentious decisions.

The Gang of Four briefly assumed control following Mao’s death. However it lasted just one month. After a heated politburo session the army was persuaded to intervene. They arranged for an emergency session of the Politburo to take place, at which the unsuspecting Gang of Four were arrested. They were put on trial in 1981 and found guilty of crimes during the Cultural Revolution. Their arrest was publically celebrated in many Chinese towns and Cities.

Mao himself died in September 1976. Under the leadership of Mao China had moved away from being a country that was dominated by foreign powers. There had been some huge improvements in areas such as mortality rates, literacy levels and healthcare. Industry and Agriculture had been transformed, at a cost. China by 1976 was seen as a major power to a far greater extent that previously.

There were issues. The Gang of Four illustrates that there could be unrest and conflict at the top of the party. This does little for stability. As a contrast, consider the lawlessness before Communist rule. The power of gangs had been massively reduced. The number of people addicted to Opiates also reduced.

The combination of positives and negatives relating to his rule make it hard to assess the extent to which the Chinese people benefited from Communist Rule.

Home » China » China and Communism under Mao
a