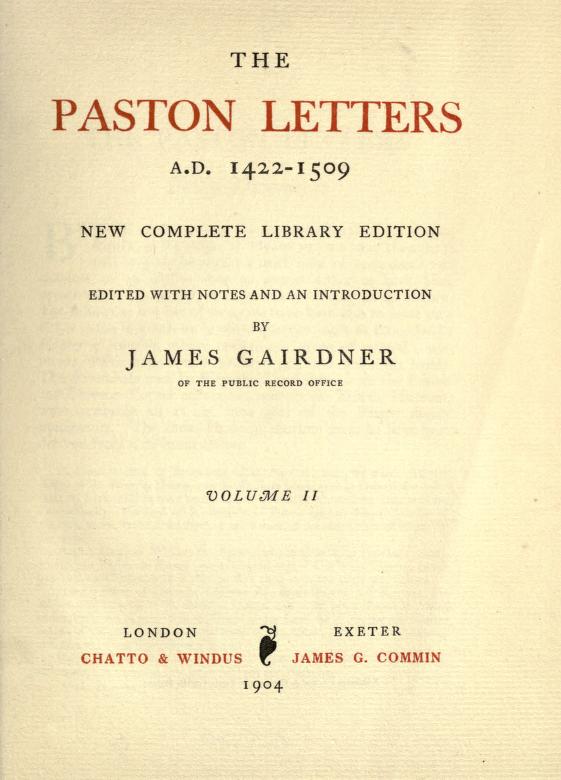 The Paston Letters are a collection of correspondence to and from the Paston family of Norfolk. Dating from between 1440 and 1489 they highlight social, economic, political and military issues of the day. The Paston family are also notable for their rise to prominence. They illustrate that in this period it was possible, over several generations, to rise through the classes. The letters of the Paston family are among the most detailed accounts of the latter Middle Ages in England. Over 1000 letters remain. They detail everything from family finances to the impending execution of nobles and affairs of state. For teachers, this family story is of great use. Take Clement Paston, as an example. In the aftermath of the Black Death he orchestrated the families rise. The letters show that he bought lands and ensured that his son was educated. By taking advantage of the socio-economic situation the area, Norfolk, found itself in, he began to establish his family as landowners. This is an excellent example of the consequences of the Black Death. Whatsmore, it is all recorded in source material.

Clement Paston’s decision to educate his son saw the fortunes of the family improve further. Letters show Clement being called a peasant bondsman. His son was far from it. His education led to him becoming a lawyer. This gave him rank, sergeant-in-arms, and a profession in which promotion could be attained: he became a Judge. Here we see written evidence that shows the rise. It illustrates that society was not as simple as lords and peasants. It shows what we may call a middle class. It also shows that you did not have to be born with a silver spoon in your mouth to gain influence. The letters show that William Paston inherited a large amount of land, and therefor wealth and influence, through marriage. Such a marriage most likely only possibly because of his education and job.

Later letters show some very ‘normal’ events. One series of letters shows an exchange about a wallet being lost, found and returned, money still in it. Again, this provides a real life example of the simple things that are everyday life. It helps to place the big political changes into the context of the day by providing the reader with a sense of period.

The family took risks. One example is the friendship with Sir John Fastolff. He is better known as being the inspiration for Shakespeare’s character, Falstaff. John Paston became his lawyer, his confidant, his friend. Quite dangerous as Fastolff was a Lollard sympathiser. Quite beneficial because his will granted the Paston’s his wealth: contested by others. However, this led to armed conflict. The Paston’s gain of Caister Castle was challenged by the Duke of Norfolk. A two month long siege resulted in it’s short term loss and the death of a close family aide.

Conditions in towns and the fact that plagues were regular are also noted in the letters. John Paston Snr is warned to be careful in the plague ridden towns. This letter turned out to be an accurate forewarning as it was the plague to which he and several other people mentioned in letters succumbed.

The BBC have a good overview of the letters including selected quotations. Caister Castle which is noted in the letters is now open to the public. It houses a motor museum as well as having the castle open.

For the academics, the letters are also noted for their use of language. They show a combination of old English and new. This has been the subject of some research, for example this.

The Paston Letters were written during the reign of the Plantagenets and in the War of the Roses.