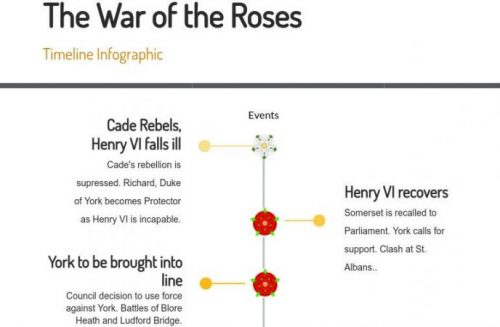 The War of the Roses is a difficult set of events to understand. Roughly 50 years of plots, counter plots, invasions along with the odd execution, murder and disappearance. As with any complex set of events it can be broken down into more accessible chunks. Here’s a handy graphic that highlights some of the key moments of the War of the Roses. From the failure of Cade’s rebellion and the emergence of a firm Yorkist claim to the throne, through to the Tudor invasion, victory and consolidation of power.

Of course this is a visualisation of the headlines. Each of these twelve areas needs exploration if a full understanding is to be gained. We haven’t just listed battles or people here. Instead, we’ve tried to highlight the way in which the conflict ebbed and flowed. There were long periods in which there was relative peace. There were battles in which very few people were engaged. Some military encounters that are terms battles would, in many circumstances, just be called a stand off, or skirmish in many contexts. Other battles are much larger, such as the Battle of Towton.

Over on our Facebook Page we have another War of the Roses Infographic that highlights the key battles and personalities. Alongside this visualiser, it covers the core knowledge that a student will need if they are studying the War of the Roses. The chronology, the names and a hint at the consequences of events are covered.

For depth, assess the reigns of the different monarchs of the era. Also look up the role of key individuals such as Richard, Duke of York, Warwick the Kingmaker. Don’t forget other members of the two royal households such as the two Queens, Margaret of Anjou and Elizabeth Woodville and Edward IV’s brother, the sometimes scheming George, Duke of Clarence.

The causes of the War can be traced back further. For that, look up a Plantagenet Family Tree. It shows the blood line claims of the various people who had some kind of right to say that they ought to be monarch. Kingship at the time was not just about blood line though, the politics of the day required strength of conviction and character as much as anything.

Home » Plantagenet » Infographic: Course of the War of the Roses
a