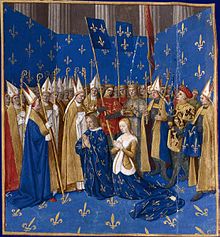 Louis is the latest addition to the House of Windsor. He shares the same bloodline and name that the English royal household were not so keen on. Read on to find out about Louis’ troublesome namesakes.

In 1216 amid baronial conflict, the French Dauphin landed in England. A long time conspiritor in Angevin affairs, he became emboldened by John’s weak rule. This Louis, the future Louis VIII, came armed and ready to seize an opportunity. His forces made their way to London. With the nobility and king occupied with their own conflict there was little to stop Louis doing as he pleased. So Louis went to St. Paul’s Cathedral and proclaimed himself to be king.

Louis may well have gained the support of the barons in his claim. But King John died. The barons supported the accession of John’s son, Henry and soon Louis was forced to return to France. Louis, though defeated on land and sea, was paid 10000 marks to relinquish his claim.

How is this French Louis related? Louis VIII of France was blood related to William the Conqueror through both his paternal line. He was 5th generation. His wife was also part of the English royal family tree, her Grandfather was Henry II.

Louis’ landing and proclamation may seem trivial. He probably doesn’t get a mention in school textbooks about Medieval England. His arrival was deadly serious though. After landing at Thanet he captured London and Winchester. The extent of his control was such that when the English did meet him in battle it was as far north as Lincoln. Many nobles, including the king of Scotland, had initially paid homage to Louis.

Our second troublesome Louis was a particularly pesky person in the 15th century. His nickname in France was “the cunning” as he just couldn’t stop himself from manipulating things for his own good.

This cunning Louis grew up as the Hundred Years War was ending and the War of the Roses raging. It was a time when France was looking to regain prestige and gain territory. Louis, aged 16, joined a rebellion against his father. Though it failed, it became clear that the young prince was a good leader but also quite ruthless. Following this failure he married his second wife, his first having died. The marriage was da diplomatic one that outraged his father.

Louis became king of France in 1461, a title still also claimed by the English. The long war between England and France was made harder for the English. Louis became involved in uprisings in Burgundy which limited the Duchy’s ability to aid England. He quickly improved administation of the French government. This, while hardly an act of cunning, would prove decisive in defeating the English and his continental foes.

The opportunity presented itself when the Earl of Warwick had a dispute with Edward IV. Louis had plotted since childhood, he was a master of manipulation and cunning. He persuaded Margaret of Anjou to form an unlikely alliance with Warwick. The plan initially worked as Henry VI was restored following an invasion backed by Louis.

Henry’s restoration was shortlived. Edward returned the following year and reclaimed the crown. In 1474, England then invaded France once more. The English achieved little in their campaign. Louis quickly and quite easily got the english to agree a treaty that ended the Hundred Years War on French terms.

This Louis can also be traced back to William the Conqueror.

It’s more likely that Prince Louis has been named after Earl Louis Mountbatten. His name influenced the middle names of Prince William and Prince George.

Home » Medieval » Louis, a pair of troublesome Royals from days gone by
a