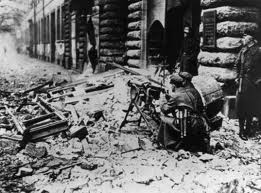 The Spartacist Uprising was a short lived attempt by the Left-Wing Spatacist group to wrestle control of Berlin. Beginning with a General Strike it soon became an armed revolt. The Spartacists, led by Liebnecht and Luxemburg managed to force the Government into negotiations. However these failed and support for the Spartacists was not forthcoming from other revolutionary groups. The Spartacist revolt was responsible for the moving of Government to the safer town of Weimar.

The Spartacist’s had extreme left wing political views. This group split from the SPD (Independent Socialists) in frustration at the SPD’s role within Government. The leaders of the Communist party were Rosa Luxemburg and Karl Liebnecht. The aims of the Spartacist’s were outlined in their Manifesto:

The question today is not democracy or dictatorship. The question that history has put on the agenda reads: bourgeois democracy or socialist democracy. For the dictatorship of the proletariat does not mean bombs, putsches (pushes), riots and anarchy, as the against of capitalist profits deliberately and falsely claim. Rather, it means using all instruments of political power to achieve socialism, to expropriate the capitalist class, through and in accordance with the will of the revolutionary majority of the proletariat.

On January 1st, 1919, members of the Spartacist movement rose in an attempted revolution. Initially this move was opposed by both Liebnecht and Luxemburg, the leaders of the movement. The newly formed Weimar Government reacted promptly, and brutally. The army was deployed to bring the revolution to an end, and these were aided by the Frei Corps, a paramilitary group consisting of former servicemen. Order had been restored to the streets of Berlin by the 13th of January. Both Rosa Luxemburg and Karl Liebnecht were killed whilst in police custody. Why was there a Spartcist revolt?

Rosa Luxemburg and Karl Liebknecht had observed and welcomed the events of the Bolshevik Revolution in Russia. The circumstances, they felt, were similar in Berlin. The Tsar’s abdication left a power vacuum. The war had cost Germany many lives and left towns and cities desperately short of food. These added to workers discontent made it likely that people would support an uprising.

The Spartacists discovered that they were wrong to make this assumption. While they did get some support, the majority were ambivolent or opposed to them. Former soldiers, one of their target areas for support, largely fought against them. These soldiers joined the Freikorps, a right wing group who themselves would go on to oppose the democratic Weimar Republic.

The Spartacist Uprising – narrative and resources.