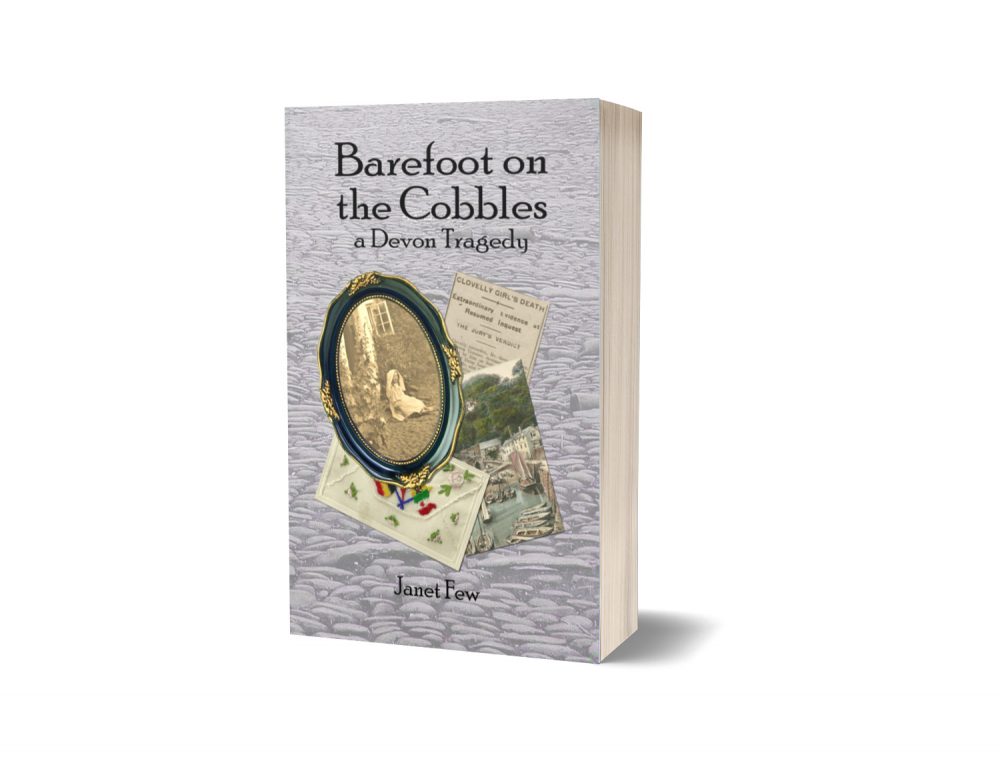 Janet Few inhabits the past. You may find her lurking in her four hundred-year-old North Devon cottage, or spot her thinly disguised as the formidable Mistress Agnes. This alter ego is a goodwife of a certain age, who leads a somewhat chaotic life during the mid-seventeenth century. One way or another, most of Janet’s time is spent working to inspire others with a love of history, heritage and the written word.

In a vain effort to support her incurable book buying habit, in the past, Janet has been known to pull the odd pint or two, sell hamsters and support very special schoolchildren. Somewhere along the way, she acquired a doctorate in community history ‘for fun’. Janet has an international reputation as a family historian, giving presentations across the English-speaking world. She has written several non-fiction history books but Barefoot on the Cobbles is her first published novel. A second novel, investigating an earlier North Devon tragedy, is being carefully nurtured. 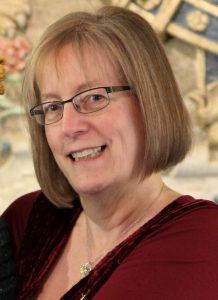 Barefoot on the Cobbles is based on actual events and has a cast of well over a hundred characters. What inspired you to write this book?

When I uncovered the story, during some family history research, I was intrigued that there was a wall of silence surrounding the events. Close relatives of the main protagonists knew nothing of the tragedy. I was immediately fascinated by what might have made those individuals act as they did, so the characters demanded that their story be told.

The information you provide about the people in your novel on your website is extremely detailed. How did you go about collating such a large amount of information?

I am a family historian. Some of the characters were already known to me. I felt it was essential to find out as much as I could about the past lives of those involved, in order to understand them and do them justice.

You cover a wide range of settings and emotions in Barefoot on the Cobbles. How did you set about making sure that your descriptions of such contrasting scenes were realistic?

With the exception of the Western Front, I visited every location several times. I also tried to make my visits coincide with the appropriate times of the year and even times of day. I did worry about the Western Front chapter, as it is so far from my own experience. I read official war diaries, battle histories and personal diaries and reminiscences. In the end, it became the chapter I was most proud of and reviewers have been very kind about it.

I noticed on your website that you were involved in an oral history project based on women’s memories of the period 1949 to 1969. Could you tell us a little more about the project and why it is so important to undertake this type of work?

I started by writing a social history of the seventeenth century, where I ‘live’ periodically. As I was writing it, I realised how wonderful it would be to speak to seventeenth-century people about their lives. Obviously, I had rather missed that boat, so I decided instead to focus on the period just after World War II, whilst there was still time. It is such a pivotal period; almost every aspect of social history underwent significant changes during those years and we need to document details of everyday life whilst we have the opportunity. One benefit of this project, which I had not anticipated, is that the book is being used by those working with people with memory problems. Often they have little idea of what life was like when their clients were growing up.

I can’t remember not writing. I still have a story I wrote when I was four.

As the plots are real historical events, they almost plan themselves. For the one I am working on now, I have decided which events I want to include and which character I want to tell each part of the story and then it is a matter of researching the details before writing each chapter. Incidentally, I don’t write my books in the right order. Bizarre I know; I was surprised too!

As a historian, it took me a while to realise that, if I couldn’t find out something, I could just make it up! In the case of Barefoot on the Cobbles, I have invented very little. Even throwaway comments, such as the doctor running a scout camp, are based on fact. The book I am writing currently is set much earlier in time, so that has larger gaps for me to fill from my imagination. In both cases, I tried to make the parts I have concocted fit with what I feel is plausible, given what I know about the personalities of the characters.

In another life, I am an historical interpreter, so I am passionate about encouraging people to engage with history and heritage. History is about people and I am fascinated by human behaviour. I try to portray my characters in a way that makes them, or at least their emotions, recognisable. I believe history is more accessible if it is personal, hence my interest in family and local history.

I probably have to say Enid Blyton as I would read up to six books a day as a child and many were hers. The first historical fiction that I read was Anya Seton’s and she is still one of my favourites. In fact I am re-reading one now. My novel is being compared to those by a friend of mine and fellow Devon author, Liz Shakespeare, so I would like to credit her too.

Yes. Hopefully, next year will see the publication of one that is again set in Devon but in the seventeenth century this time. Although this one will have a modern strand as well

Read, read and read some more. Then just make a start.

Janet Few inhabits the past. You may find her lurking in her four hundred year old North Devon cottage, or spot her thinly disguised as the formidable Mistress Agnes. This alter ego is a goodwife of a certain age, who leads a somewhat chaotic life during the mid-seventeenth century. One way or another, most of Janet’s time is spent working to inspire others with a love of history, heritage and the written word.
In a vain effort to support her incurable book buying habit, in the past, Janet has been known to pull the odd pint or two, sell hamsters and support very special schoolchildren. Somewhere along the way, she acquired a doctorate in community history ‘for fun’. Janet has an international reputation as a family historian, giving presentations across the English-speaking world. She has written several non-fiction history books but Barefoot on the Cobbles is her first published novel. A second novel, investigating an earlier North Devon tragedy, is being carefully nurtured.

Any time that Janet can carve from her history-obsessed existence, is spent embarrassing her descendants, travelling and trying to make her garden behave itself. Janet is fascinated by human behaviour, past and present, real and fictional. She loves the wonderful Devon landscape and leading her grandchildren astray.

Barefoot on the Cobbles

In the euphoria of the armistice, a young woman lay dying. Daisy had grown up, barefoot on the cobbles, in a village on the rugged North Devon coast; she was mindful of the perils of the uncertain sea. Her family had also been exposed to the dangers of disease and the First World War but for Daisy, it was her own mother who posed the greatest threat of all. What burdens did that mother, an ordinary fisherman’s wife, carry? What past traumas had led, inexorably, to this appalling outcome?

Vividly recreating life at the dawning of the twentieth century, Barefoot on the Cobbles is based on a real tragedy that lay hidden for nearly a hundred years. Rooted in its unique and beautiful geographical setting, here is the unfolding of a past that reverberates unhappily through the decades and of raw emotions that are surprisingly modern in character.

Barefoot on the Cobbles – The Novel

A. E. Walnofer writes powerful dramas set in the 17th to 19th centuries.

Home » Author interviews » Barefoot on the Cobbles – Janet Few
a