A.E. Walnofer writes period dramas set in the 17th to 18th centuries. Her novels place characters in typical everyday settings and lead them on dramatic, romantic tales. The books are quite powerful and the author is eager to make these freely available to colleagues in the education world: Written into With Face Aflame is a strong, body-positivity message that I think is vital for young people (especially girls) to hear. Therefore, I want to get this book into the hands of educators who can tell teens about it. If you would like a FREE ebook version of With Face Aflame (mobi, pdf or ePub) then simply send the author an email at aewalnofer@gmail.com 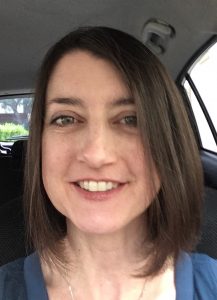 What has inspired you to set your novels in the 17th and 18th centuries?

I love history because I am fascinated by the fact that throughout time, people have simply been people. We have all of our frailties, strengths, heartbreaks and triumphs. You and I could have been born in a completely different era and location, but we would still be ourselves at our core. Sure, our varying experiences and opportunities greatly affect us, but I’d still be me and you’d be you. As for why I set my book, With Face Aflame, in the English Restoration Period (1660 – 1685) and my other book, A Girl Called Foote, in the Regency Era (literally 1811 – 1820, but arguably 1795 – 1837), both of those times capture my imagination. But other times do too, so watch for future books to be set in other centuries.

Personally, I know very little about the Regency period. It’s also an area that gets little time in schools. What makes the period special to you?

The Regency Period was when King George III was regarded as incapable of ruling the kingdom due to illness so his son acted as Prince Regent to rule in his place. The literal Regency Era lasted less than a decade, so it is virtually a blip on the screen in English history. However, Jane Austen put it on the map because that’s when her novels were published. Because she devoted herself to sitting in the parlour where she scribbled imaginatively and madly upon reams and reams of precious paper, we have a view into what life was like during that time period. Her books make that era special to me because they do such an excellent job of showing so many silly, passionate, obstinate, thoughtful humans in day to day life, telling their stories and making even mundane occurrences interesting.

How did you research the periods? How have you set about choosing the way in which your central characters speak? Your style allows them to feel as though they are in period without needing to necessarily use old English.

I read literary works and contemporary accounts which were written in those time periods. For With Face Aflame, I read every word of Samuel Pepys’ Diary, which gave me an excellent feel for the language of the time and the lifestyles of people from many different sectors of society. My goal is to never use a word in my books that wasn’t already being used in the time period in which they take place. I found it quite surprising and amusing that Samuel Pepys referred to a bit of excrement as ‘a turd’. Who would have thought? Finding works to read in preparation for A Girl Called Foote was easier as many more books were being written by the early 19th Century. Of course, I read through Austen’s works to help me out there.

Presently, I have four books in the works. One has 42,000 words written. Another has a strong framework established and has been fleshed out with a few scenes. The remaining two are merely ideas with a few compelling thoughts behind them.

With the 17th and 18th centuries already featuring in your historical fiction, where and when will your next novel be set?

My next book is set in the Regency Period, but one of the other three is the story of Thrin, a character who makes an appearance in With Face Aflame, so that would take me back to writing about the 17th Century.

I’ve been making up stories of my own since I was three years old. My mom has proof on an old audio cassette tape. (Though I doubt she still has a tape player through which to listen to it!)

Foote was first and it really wasn’t planned. I just started writing and redoing, restarting and sputtering along. That’s why it took about six years of on and off writing to actually finish it! After reading Story Engineering by Larry Brooks, my writing life went from chaotic to ordered. He has a list of questions that you need to be able to answer before you start writing in earnest, which all help you know where you’re going and help you figure out how to get there so you don’t get lost or crash and burn on the way. Don’t get me wrong, writing’s still frustrating because doing it well is hard, but I feel a lot less crazy these days as I’m attempting to do so which is great!

How do you balance the fact and fiction when writing this type of novel?

1) Figure out what sort of books you like and then read, read, read a whole bunch of them.
2) Get a copy of Larry Brooks’ Story Engineering and dogear the pages that really teach you something (there will be a lot of them!)
3) Once you hand over a piece of your writing (aka a piece of your vulnerable and tender heart displayed on paper for all to see) to your esteemed beta readers, weigh their resultant criticism carefully. Try to understand what they mean by it; try not to get bent out of shape over it; use some of it to refine your craft and disregard the rest. In other words, don’t ask people for honest opinions unless you really want them and can handle hearing and utilizing them.

Thanks for giving me a little time of your day! Check out my website at aewalnofer.com and sign up for my newsletter under the“Future Titles” tab. Below are the blurbs and links to my books, both available on Amazon.

With Face Aflame by A.E. Walnofer

Born with a red mark emblazoned across her face, seventeen-year-old Madge is lonely as she spends her days serving guests and cleaning rooms in the inn her father keeps.

One day, she meets an unusual minstrel in the marketplace. Moved by the beauty of his song and the odd shape of his body, she realizes she has made her first friend. But he must go on to the next town, leaving her behind. Soon after, while she herself is singing in the woods, she is startled by a chance meeting with a stranger there. Though the encounter leaves her horribly embarrassed, it proves she need not remain unnoticed and alone forever.

However, this new hope is shattered when she overhears a few quiet words that weren’t intended for her ears. Heartbroken and confused, she flees her home to join the minstrel and his companion, a crass juggler. As they travel earning their daily bread, Madge secretly seeks to rid herself of the mark upon her cheek, convinced that nothing else can heal her heart.

Set in England in 1681, With Face Aflame is the tale of a girl who risks everything in hopes of becoming the person she desperately wants to be. Available on Amazon for $2.99.

SPECIAL OFFER for TEACHERS and LIBRARIANS

Written into With Face Aflame is a strong, body-positivity message that I think is vital for young people (especially girls) to hear. Therefore, I want to get this book into the hands of educators who can tell teens about it. If you would like a FREE ebook version of With Face Aflame (mobi, pdf or ePub) then simply send me an email at aewalnofer@gmail.com, telling me your name, what grade and subject you teach and at which school. I’ll email you back with an attachment of the ebook as stated above. Come on; you know you want a copy!

Young Jonathan Clyde causes mischief for everyone at Whitehall, the stately home of his privileged ancestors. As he matures, however, he comes to despise the vanity and conceit surrounding him.

Misfortune requires Lydia Smythe, an exceptionally clever farmer’s daughter, to seek employment at Whitehall. As a parlor maid, she feels stifled and harried by those over her. Still, she refuses to relinquish her independent mind and spirit.

From the moment Jonathan catches Lydia reading the books she is supposed to be dusting, he is intrigued by this unusual servant. Thus begins a clandestine relationship that is simultaneously amusing, confusing and enlightening. Just as it is evolving into something neither of them expected, an unforeseen truth comes to light, and the two wonder if their unconventional bond will be forever lost.

Set in England in the mid-eighteen hundreds, A Girl Called Foote is the coming-of-age story of two similarly impressive people leading very different lives. Available on Amazon for $2.99 or less.