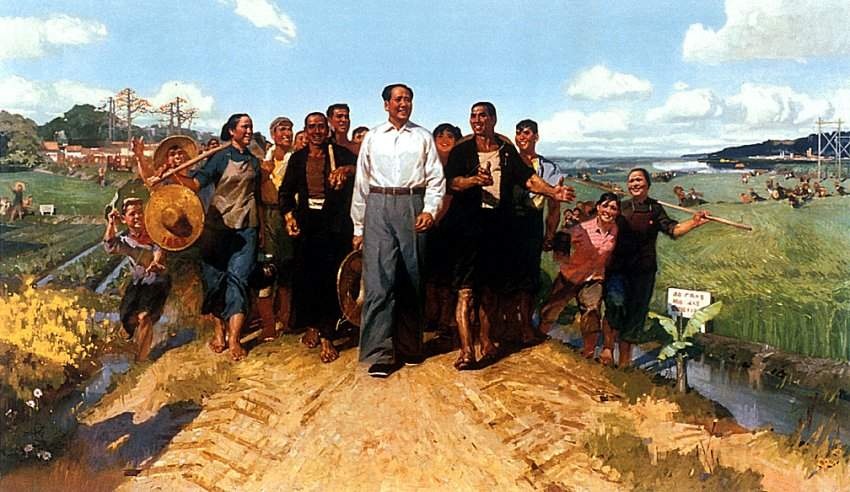 What changes in agriculture did Communist rule bring?

In 1950 Mao introduced the Agrarian Reform Law. This law essentially gave the land to the peasants. Party Officials moved throughout China to speed up the transition from ‘owned’ land to shared land. Landlords were rounded up and re-educated, or executed. Agricultural policy was aimed at creating a surplus to protect China from foreign powers. In 1953 a campaign was launched that encouraged the establishment of small scale collective farms, with between 20 to 30 households sharing the work and land of the farms. These collectives were based on the Soviet Kolkhutz programme. In 1955 Mao, against the wishes of many leading party officials, sped up the process of developing the collective farms – and larger versions of them. This led to protests from wealthier peasants who were able to live off their own land – they had been promised land by the Communists and were now having it taken away from them.

Mao’s government knew that China needed to prodice a surplus of agricultural goods if the nation was to be able to invest in the infrastructure and military. To enable this there was heavy investment in the development of fertilisers, hybrid seeds and irrigation schemes established along the banks of many Chinese rivers.

The Xinjiang Production and Construction Corps, comprising of former soldiers and convicts, was established to build dams, roads and railways that would aid economic growth and help farmers.

Despite the investment in new techniques and collectivisation, agricultural production did not increase substabtially, nor were the distribution problems overcome adequatelly.

Workers on Collective farms each received a home and a small plot of land on which they could grow their own vegetables. They also received health insurance, paid holidays and were educated.

Private ownership of land ended with the land being granted to the peasants.

New technologies and techniques were adopted.

1. Do not be impetuous. The speed of land reform should be determined according to the circumstances, the level of political consciousness of the masses and the strength of leading cadres. Do not attempt to complete the land reform in a few months, but prepare to complete it in each area in two or three years. This also applies to the old or semi-old Liberated Areas.

2. Land reform in a new Liberated Area should be divided into two stages. In the first stage strike blows at the landlords and neutralize the rich peasants. This stage is to be sub-divided into several steps; strike blows at the big landlords first, and then at the other landlords. Treatment must be different for those who are local tyrants and those who are not, and different also for big, middle and small landlords. The second stage is the equal distribution of land, including the land rented out by the rich peasants and their surplus land. However, the treatment of rich peasants should differ from that of landlords. The total scope of attack should generally not exceed 8 per cent of the households or 10 per cent of the population. In the semi-old Liberated Areas the differences in treatment and the total scope of attack should be the same. These questions do not arise in the old Liberated Areas, where in general only minor adjustments in the distribution of lands are needed.

4. Do not start the work in all places at the same time, but choose strong cadres to carry it out first in certain places to gain experience, then spread the experience step by step and expand the work in waves. This applies to a whole strategic area as well as to a single county. It also applies to the old and the semi-old Liberated Areas.

Chairman Mao emphasized particularly that arrangements for all types of work must be the subject of vigorous and uninhibited debate by the masses. He said that if plans and directions were not debated by the masses, the ideas would be yours [i.e., those of the cadres]. After such debates, the masses themselves became the masters, and were naturally prepared to work more energetically. Chairman Mao emphasized once more that the leading cadres must go frequently to the lower levels to have a look, to aid the basic-level cadres in summing up their experience, and to give guidance on the spot. When T’an Ch’i-lung (Shantung provincial secretary) reported that Pei-yuan hsiang in Li-ch’en hsien was preparing to set up large [collective] farms, Chairman Mao said: ‘It is better to set up people’s communes. Their advantage lies in the fact that they combine industry, agriculture, commerce, education and military affairs. This is convenient for leadership.

Facts and Details – Agriculture under Mao