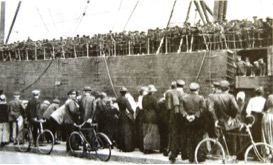 The British Expeditionary Force (BEF) was established by Minister for War, Richard Haldane, after the Boer War. it’s purpose was to enable the British Government to respond quickly to any crisis in the world that threatened British interests. The need for the force had been illustrated in the Boer War as many of the soldiers involved had been ill equipped and lacking in training in modern warfare. By the time that the First World War broke out, the BEF was a fighting force of approximately 120,000 men. When Germany invaded Belgium on August 4th 1914, the BEF was sent to France to prepare to halt the German advance. It was first engaged in combat at the Battle of Mons at which it was heavily outnumbered and forced to retreat. The BEF, alongside French troops, was more successful at the battle of Marne. Here the German forces were pushed back over the River Aisne, preventing the capture of Paris. as a result of the advance being halted here, the Germans did two things. Firstly, they dug defensive trenches in the Aisne valley, secondly, they tried to outflank the Allies on their northern side. This second action is commonly called the race for the sea.

At the beginning of the First World War the British Army was a small, professional force. It had 247,432 regular troops organised in four Guards and 68 line infantry regiments, 31 cavalry regiments, artillery and other support units. Almost half of the troops were stationed at garrisons around the world, rather than in the United Kingdom. In addition there was an Army Reserve of 145,00 former soldiers and a Special Reserve of 64000 men (similar to todays territorial army). A list called the National reserve was kept of all other men who had any previous military experience. There were 215,000 men on this list.

In August 1914 the British Expeditionary Force was mobilised. Six Infantry and One Cavalry Division were sent to France as the BEF. They totalled around 150,000 men. Each infantry division held 24 machine guns. Artillery was organised into separate brigades. In 1914 the BEF had 54 18 pounder guns and 18 howlitzers. The Cavalry division was divided into 15 regiments in 5 brigades. The men were armed with rifles and supported by 24 13 pounder guns. This mobilised force sounds impressive but in reality it is very small compared with the French Army in 1914 who mobilized 1,650,000 troops and 62 infantry divisions, while the German Army mobilized 1,850,000 troops and 87 infantry divisions.

The BEF was deployed on the Western Front in a section of the front lines near Mons. Their first action was the use of massed rifle firing to hold back the German advance. This was highly effective – indeed some Germans thought the British were using machine guns rather than rifles. They then retreated to a more secure defensive location at Le Cateau. At Le Cateau the Germans used different tactics. They fired shrapnel shells at the British lines which prevented them using massed rifle fire. Just short of 8000 men of the BEF, out of 40,000 stationed there, were casualities. Despite this heavy loss the BEF had achieved its objective as the bulk of the forces had been able to to move unattacked into positions closer to Paris that would help to secure the French Capital from attack.

The main rifle carried by British soldiers in 1914 was the Short Magazine Lee Enfield (SMLE). Introduced in 1903, the .303 inch calibre weapon had a magazine of ten rounds. While it packed a heavy recoil when fired, regular soldiers before the war were trained to fire a minimum of fifteen aimed rounds per minute, and be able to hit a target every time. This rate of fire was well above any other army in the world, and most soldiers were also trained to engage targets at distances up to 1000 yards. The SMLE had a high stopping power, being able to penetrate eighteen inches of oak, thirty-six inches of sandbags and two house bricks at up to 200 yards range. Source: British Infantryman, 1914-1915. http://battlefields1418.50megs.com/uniform1.htm

Trench Warfare – Simulation: Would you make a good officer in the trenches? – British contribution to the Western Front

Medicine in the First World War