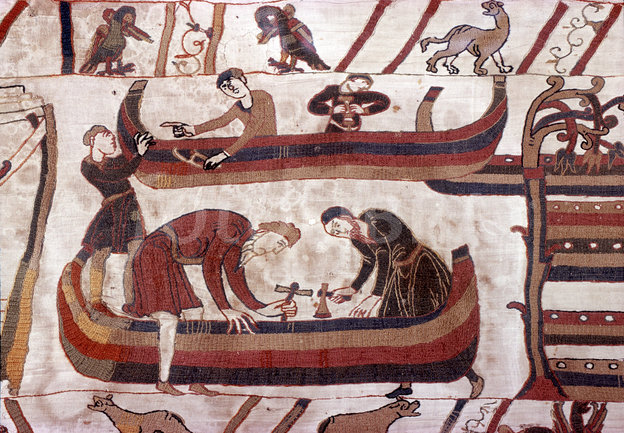 The Norman Invasion of England in 1066 had been prepared well. Duke William knew that there would be other claimants to the English throne. A fleet was prepared. An army assembled. Arrangements made for the governance of Normandy in his absence. Allies were called upon for support and Papal blessing sought, and gained, for the venture.

When Edward the Confessor died in January of 1066 it sparked a series of attempts to take the crown. The different claimants to the throne would at some point all take to arms to press forward their claim. Harold of Wessex took the crown quickly. He was the most powerful of the Saxon lords and had the support of most of the leading nobles.

The Norman Invasion was planned by a number of nobles. William worked with men such as his half-brother, Odo of Bayeux, to ensure that every detail was accounted for. A successful invasion by the Normans would need several things: As well as practical things such as those above, an invasion force needs motivation. Here a leader needs to offer the rewards, such as land, but the cause has to be one that the men are willing to fight for. William gained Papal approval for his invasion. With the church saying that he was the rightful King of England, the invasion was easily justified.

The Invasion of England by the Normans could take place once all of the preparation was completed. It was though, dependant upon the weather. The ships were powered by sail and oar. The wind had to be blowing in the right direction. On two occasions the Invasion fleet was damaged by storms before it had even set sail. Eventually, on the 27th September, 1066, the Norman fleet set sail from St Valéry sur Somme.

Upon landing, the Normans protected their ships by creating an embankment. This created a harbour of sorts which would prevent storms from damaging the fleet. The Normans had landed near Pevensey. Here they made use of a Roman Fort. Earth ramparts were put up to create a temporary Castle: later developed into a permanent stone castle.

With the ships secured and a fort from which his men could defend themselves, the Norman Invasion force was able to assess the surroundings and situation. William received intelligence reports about the movements of the Saxons. His men were ordered into the local area where they destroyed all they could find. William was forcing the English to come to him. Then he could fight on his terms.

English Heritage – How to organise a Norman Invasion