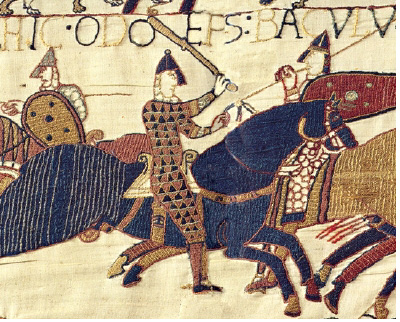 Odo of Bayeux was the half-brother of William the Conqueror. After the conquest, Odo became Earl of Kent whilst retaining his position as Bishop of Bayeux. Odo was made bishop at an early age, in his teens. He held positions of state and was responsible for much of the planing, preparation and execution of the invasion of England. At his peak, Odo was the second most powerful man in the Norman empire. He later fell from grace and lost land and authority. It is likely that Odo commissioned the Bayeux tapestry, produced within his Earldom of Kent for display in Bayeux Cathedral. Odo was one of the nobles who supported the claim of Robert of Normandy to England’s throne in 1088. He was banished from England and served Robert, Duke of Normandy. It was whilst on Crusade with Robert that Odo died, in 1097. As Odo grew up, his half-brother was battling to consolidate his control of Normandy. Odo was given the role of Bishop of Bayeux at an early age, perhaps even below the minimum age allowed. This may have been a political move by William to prevent Odo desiring the Dukedom at a later date.

As William’s position as Duke became more secure, Odo was becoming more competent and important. He was present at Councils and acted as a representative of the Duke on important matters with neighbouring Duchies. He was an able administrator.

When it became clear that the succession to the English throne would provide William with an opportunity, Odo was ready. The bishop used his administrative skills and his diocese to muster a private army to accompany William’s invasion. Odo was also tasked with finding ships to carry the invasion force.

The Bayeux Tapestry and chronicles show that Odo was a prominent figure at the Battle of Hastings. He is depicted holding a staff or club, rather than a sword. This illustration of him may be due to the fact that the rules of the church forbade priests to deliberately draw blood.

His importance to William and the conquest were important. To reflect this, Odo was made Earl of Kent. This was a significant position. He now held land in 23 counties. This was second only to the king himself. Odo also took a role that was pivotal to the development of a new Norman system of administration. The Feudal System, as taught in schools, illustrates the way that power moves from top to bottom. What is doesn’t always show is how this changed things on a day to day basis.

William changed the way English Law was administered. He centralised things. It gave power to the King and his closest advisors. The person he appointed as the First Chief Justice of England was Odo. This role managed the distribution of law through the feudal system from the top downwards. Odo was responsible for law, order and also finance.

A priest running such things was not extraordinary. At the top levels the church and state were closely linked. They squabbled on occasion but so to did the nobles.

Odo acted as unofficial Regent when William was out of the country. He led forces against rebel groups on several occasions. This included the rebellion of the Earls in 1073. As a result of this rebellion, Earl Waltheof was executed, the only Saxon noble to suffer such a punishment under the Conqueror’s rule.

Odo however was much disliked. His power and methods led to discontent. Word of this reached William. Upon investigation it was discovered that Odo had been misusing money for his own ends. Odo was forced to relinquish some roles. In 1082, Odo was troublesome again. This time he was found to be planning for war in Italy. The Normans dd have lands in Italy and Sicily was partially occupied by Norman lords. Odo was working without William’s knowledge or consent though. Whatever Odo’s motives, he was to spend the rest of the Conqueror’s reign as a prisoner.

Released on William’s death, Odo soon found himself in trouble once more. William Rufus had been crowned King of England. The eldest of the Conqueror’s sons, Robert Curthose, was angered by this. Odo joined the plot to overthrow Rufus and replace him with Robert. The rebellion failed and Odo was stripped of all of his ranks in England and banished to Normandy.

Odo worked in the household of Robert Curthose, Duke of Normandy. In 1095 Odo was present at Clermont when Pope Urban II called for a Holy War to recapture Jerusalem. Odo joined Robert on Crusade. He was not to see Jerusalem recaptured, he died at Palermo on route to the Holy Land.