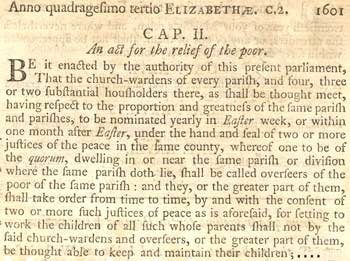 During Elizabeth’s reign the issue of helping, or dealing with, the poor became a greater one. A Poor Law was introduced in 1601 to address the issue. The Elizabethan Poor Law provided for Indoor Relief and Outdoor Relief. The Poor Law put into legislation the right of local Justices of the Peace to levy tax for the relief and assistance of the Poor. In the Medieval era the poor were dealt with in a number of ways. Monasteries had played a large part of the way in which assistance was given to those in most need. As the Monasteries had been dissolved by King Henry VIII in the years following 1536, this source of aid was no longer available to the poor. This in turn led to an increase in the number of beggars, vagrants and those simply in dire need.

In the period between the dissolution of the Monasteries and the introduction of the 1601 Elizabethan Poor Law, much of the treatment of the poor had focused on punishment. Those who were able bodied but not working were deemed to be lazy and were treated with disdain. This was included in laws pass in 1563. In these laws JP’s (Justice of the Peace) could levy tax for the assistance of the poor. The poor were classified in 3 brackets: a) The able poor who would work b) The able poor who would not work c) The poor who could not work, including children.

The 1563 provisions meant that those who could (and would) work received some assistance in their own home: outdoor relief. The ill, infirm, elderly and children could be given indoor relief. Indoor relief was being taken ‘indoors’ into an almshouse or similar. Those who would not work received nothing. It was common for them to be whipped through the streets as a form of corrective punishment.

While these provisions did enable local JP’s to help the poor they had limitations. These limitations were exposed and the system stretched by a series of hard winters and poor harvests in the 1590’s. Elizabeth’s Government realised that something needed to be done. The Elizabethan Poor law was their solution.

The law tidied up a lot of previous methods of helping the poor. It put the categories of poor into legislation and made the provision for them clearer:

The system meant that the local Parish would administer and organise relief of the poor. In theory this meant that the difference between Impotent and Able-Bodied Poor would be relatively straight forward, the Parish would know the people and be able to distinguish quite easily.

The Poor Relief was paid for by a tax on dwellings. In theory the tax was to the property owner. In practise it was the tenants who usually paid.

The Elizabethan Poor Law allowed that tax to be levied at a rate that was deemed neccessary and affordable within each parish. Therefore the rates varied from one Parish to the next. This parochial approach also meant that the level of provision varied. In some parishes the care was much better than in others. In some the poor relief rate was much higher than the amount spent upon poor relief, in others local charities aided relief and therefore taxes were lowered.

The almshouses and workhouses were managed by Overseers of the Poor. This was a group of people appointed within the parish to look after, oversee, the way in which relief was administered. With some 1500 Parishes nationwide it was the case that some of these committees of Overseers were far more effective than others.

The system was refined through further legislation after Elizabeth had died.

Workhouses.org – Origins of the Poor Law