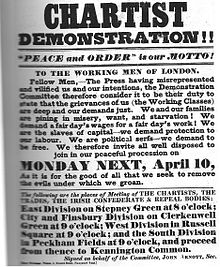 Chartists were people who wanted the ‘People’s Charter’ to be adopted. The People’s Charter was a document that set out reforms that ordinary working class and middle class people wanted the government to make. The Peoples Charter said that there should be:

ABOLITION OF THE PROPERTY QUALIFICATIONS FOR M.P’S

The introduction of these reforms would provide equality and give the ordinary man a say in the way the nation was run. The Charter was widely supported, with a petition of six million being sent to Parliament on one occasion. Use the links below to find out how the Chartists pushed for reform, and consider how successful the protest movement was.