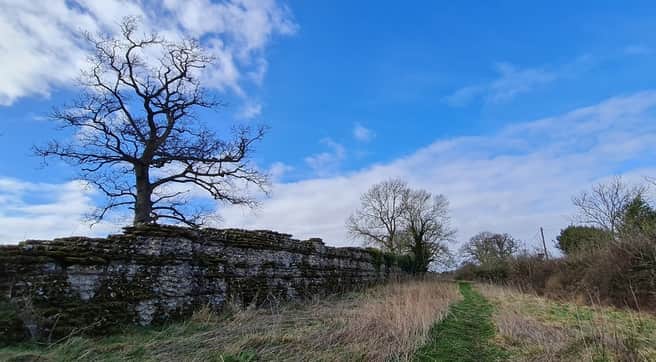 Roman Silchester was a large fortified town built on the site of an Iron Age settlement. The town was constructed shortly after the Roman occupation of the south, Silchester became one of the largest settlements that the Romans built in the British Isles. In Roman times the settlement was called Calleva Atrebatum. This used the name of the Iron Age tribe whose settlement it was built upon, the Atrebates tribe who had called the settlement Calleva.

Why did the Romans built a fortified town at Silchester?

The Romans wanted to make sure that their rule over Britain was secure. To do this they built fortifications at regular intervals. The intention was to have safe places to stay after a days march. Where this tied in with important trading routes, the Romans established fortified towns. Roman engineers didn’t just build anywhere though. They chose places that were easy to defend. The town needed access to water. Each town would need to have ample agricultural land. Access to navigable waterways was an advantage, though this was not essential if roads could connect the town with ports.

Calleva Atrebatum offered this. The site is on a naturally raised plateau. This means that the land is slightly higher than the surrounding area. If you are stood on the plateau, you can see for miles around. This meant that it was easy to spot any attackers. With a wall built around the edge of the plateau, and a ditch dug where the plateau met the normal ground level, it would be an imposing structure.

Also of importance is the size of the plateau. It was possible for the Romans to build everything that was needed for a large, thriving, town within the walls of Roman Silchester. This was a huge advantage as it meant that everything could be kept safe. The land was reasonably flat, making it easy to build on.

How big was Roman Silchester?

The inside of the walls at Calleva Atrebatum is a large area. The exterior wall measures around 2.4km kilometres. This is much larger than most towns in Roman Britain. London’s Roman Walls were around 4km in length. Chester’s Walls are 3.2km in length. This meant that Silchester was large enough to house up to 20,000 people at its peak. It was larger than many towns that had walls built in the middle ages. For example Southampton’s walls, built mainly in the 14th century, were 2km in length and the population is estimated to have been around 5000 in 1338.

How do we know what Roman Silchester was like?

There are several ways in which we can find out about Ancient towns. Physical remains, Archaeological finds, Written evidence and comparisons with other similar sites provide information. These can then be looked at to form an interpretation of what Roman Silchester was like.

Some buildings or construction remains in places such as Silchester. This gives us a visual idea. In the case of Roman Silchester the remaining constructions are the walls of the town and the amphitheatre.

It isn’t just buildings that are affected by later periods. Everyday objects are often found outside of a building. Things such as plates, cups, glasses, cooking equipment, farming equipment, and evidence of ordinary people’s jobs and daily living can be found at many places in and around a historic site. Much is learnt from rubbish!

Many Roman sites have remained in use over the 1600 years since the Romans left Britain. This results in items being buried under layers of waste, rotting, being badly damaged, moved from the original location as a result of building.

All of this can limit the amount of Archaeological evidence that can be found at a site.

Roman Silchester did continue to be used after the Romans left. Unlike places like London, York, or Chester, this usage has not continued to the modern day. At Silchester the site remained in use until the 6th or 7th century. The site then fell out of use as a settlement. As a result, the site has been relatively untouched by later civilisations. This means that finding things that are Roman, or early Saxon, is a bit easier as there is not 1600 years of other materials mixed in with it.

The University of Reading have taken a lead of investigating the Roman period at Silchester. They have undertaken several studies that build on work done by the Society of Antiquities in the Victorian Age.

A Town Life project ran excavations for 18 years on one section of the site. The finds can be found here.

The Roman Baths at Silchester were subject to the most recent excavations. Progress on this investigation is here.

A look at the way in which culture spread was undertaken through looking for evidence of the Emperor Nero being referenced in the site. That is a fascinating aspect which shows how important the imperial family was within the wider empire. Those findings are here.

The archaeological projects do not look at the settlement in isolation. To understand the bigger picture the surveys have looked at the wider use of the environment around the town. These findings can be found here.

The University of Reading have a clickable scale map of the site which provides information about the digs that they have undertaken at Silchester. It can be found here.

The Amphitheatre at Silchester

Roman Silchester has one of the best preserved amphitheatres in the British Isles.

The Amphitheatre at Silchester was constructed outside of the town walls. The arena is 45m x 39m in size. The floor was dug into the ground and displaced soil used to form part of the banking that surrounds the arena. The banking was used for wooden seating which experts from the University of Reading estimate could have accommodated up to 9000 spectators. As you can see in the images below the banking has a slight incline immediately adjacent to the main entry point and the smaller ramp opposite. It becomes very steep and high to the sides.

Amphitheatres were NOT used for performances such as the ones that we may see in a modern theatre. A different type of theatre housed dramatic performances. Instead, Amphitheatres were home to things that nowadays would be viewed as being quite barbaric. Gladitorial combat was common in Amphitheatres across the Roman Empire; Armed men versus Wild Beasts was considered to be entertainment; Animal fights were also known to have taken place in Amphitheatres. A further use for the arena may have been for the purpose of public executions. As no written records exist for the usage of the arena at Silchester, historians have to rely on things known to have taken place at similar sites.

What happened to Calleva Atrebatum when the Romans left?

When the Romans left Britain the town of Calleva Atrebatum continued to be occupied within the walls for several generations. Then the usage of the area changed. Silchester as we know it today gradually replaced the old Roman settlement. So there has been continuous occupation of Silchester but the centre of the settlement changed.

What happened to the old settlement within the walls?

Most buildings were made of wood and simply rotted over time, or had the timber moved away for other purposes. Stone buildings in this part of the country are quite rare due to local geology. Any stone constructions would therefore have been prized for the building materials. To illustrate the nature of that construction issue, note that the Normans shipped the stone for Winchester and Salisbury Cathedrals across the English Channel as there was no local quarry.

Quite quickly the site would have been reduced to ground level. Then the land would have become quite useful for agricultural purposes. Livestock could be safely grazed within the walls. The land is also quite level which lends itself to ploughing. At the site there is evidence of Medieval Ploughing on slopes outside of the walls though.

The settlement moved from within the Roman Walls to its current site a short walk away. A Stone Church was built which remains open today.

Dan Moorhouse graduated in History and Politics and has since undertaken postgraduate studies in Medieval History and Education.

Dan Moorhouse graduated in History and Politics and has since undertaken postgraduate studies in Medieval History and Education. Dan is a member of the Royal Historical Society and has previously been a member of the Historical Association’s Secondary Education Committee. Dan’s early publishing was in the Secondary School History Education field. This included co-authoring the Becta Award shortlisted Dynamic Learning: Medicine Through Time series for Hodder Murray and contributing to the Bafta Award winning Smallpox Through Time documentary series by Timelines.tv.