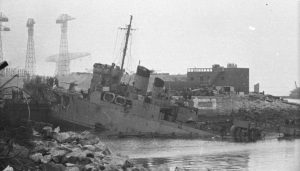 On 28th March, 1942, a force of British Commandos supported by the Royal Navy made an audacious assault on the port of St. Nazaire. St. Nazaire lay at the mouth of the River Loire. It was home to the German forces largest dock on the Atlantic Coastline. The raid saw one obsolete destroyer, the Campbeltown, and 18 smaller craft attack and disable the German dry docks at St. Nazaire. The raid had very high casualty rates but succeeded in disabling the dry docks at St. Nazaire.

611 men of the Royal Navy and Commando Units took part in Operation Chariot. 169 of these men died in the raid. 215 were captured and became prisoners of war. Only 228 were able to reach home. The actions at St. Nazaire resulted in 89 of the men receiving military decorations for their actions, including 5 Victoria Crosses.

In 1942 the Germans had control of France. They occupied much of the north and Atlantic Coastline and a compliant Vichy government ruled the rest of France. From Northern France and the Atlantic Coast the Germans were able to launch attacks against Allied shipping. German submarines tended to be based a little further north, near Brest. At St. Nazaire there was a deep water entry to a port with dry dock facilities. This made the port a vital part of the German war effort. Any large ship needing repair would need such a dock. If these dry docks at St. Nazaire could be neutralised, the German navy would have no alternative but to sail much further, back into Germany itself. This would be through the English Channel or around the top of the British Isles into the North Sea: both of these routes were heavily defended by the Royal Navy. St. Nazaire was therefore key to the Germans ability to fight an ongoing naval war in the Atlantic.

What was the plan?

Once the dock was secured and the charges set the small ships would escape back down the river and into the open sea. The raid was not without risk. Casualties were expected and there was no guarantee that the mission would be a success.

What happened during the attack?

The assault team was escorted to the Loire by other destroyers and two hunter class vessels. They managed to avoid being seen. A small air raid on St. Nazaire helped to divert attention from the approaches to the port. HMS Campeltown was able to get within minutes of the dock before finally being challenged and fired upon. With searchlights from both sides of the river and the entrance to the port blinding the crew of HMS Campbeltown the captain ordered that speed be increased. They aimed the ship at the entrance to the dock. Despite one helmsman being killed and another badly wounded, the Campbeltown struck home. She rammed the gates to the dock, lodging herself some thirty metres into the entrance.

Commandos, demolition teams and mortar crews rushed from HMS Campbeltown. They quickly set about destroying what they could of the port. 3 of these teams achieved their objectives without loss. A fourth achieved its objectives with the loss of four men. Other teams, from the small vessels, were struggling to land the commandos.

The commandos that were on shore soon found that they were under intense pressure from the Germans. There appeared to be no realistic way of them getting back to pick up points to return to sea. Orders were given for them to remain on land, to attempt everything possible to evade capture, returning to England if possible and to not surrender until all of their ammunition had been exhausted. Most of these men were captured relatively quickly. However some managed to make their way to Spain, from where they returned to England.

The small ships that were at sea harassed the enemy, laid charges on some German vessels and waited for an opportunity to pick up the commandos and demolition teams. When it became clear that the docks had been recaptured by the Germans, these vessels made their way back towards open sea. Not all of these ships made it as the heavy artillery of the Germans was able to fire on them for up to four miles.

The dock was unusable. HMS Campbeltown was wedged and the detonation of the charges was successful. This meant that the Germans would have no dry dock on the Atlantic that could cater for her largest and most dangerous battleships, such as the Tirpitz.