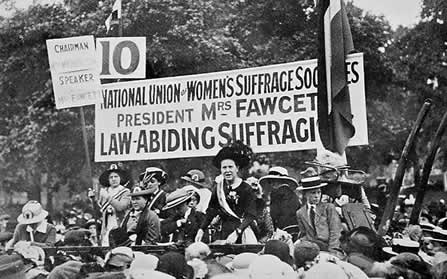 Victorian women had few civil or political rights. A wife had to do as she was told by her husband, who was her protector and adviser. Until 1884 a wife was officially listed as one of her husband’s possessions. In addition, Victorian women were expected to live up to an image of ‘the perfect being’– beautiful, demure and loving. Many women agreed with this attitude. As the 19th century progressed, women were given the right to vote in local elections. But by 1900 they still did not have a Parliamentary vote.

In 1866 a group of women took a petition, signed by 1,500 women asking for the vote to Parliament. They were ignored. In 1897, the different female campaign groups joined together and became the Suffragists. These ‘Suffragists’ campaigned peacefully for the vote. Although the number of MPs who wanted women to have the vote grew, the Suffragists got nowhere. Votes for Women Campaigners from the NUWSS

In 1903 Emmeline Pankhurst formed the ‘Suffragettes’. The Suffragettes, were much more violent. They held mass-meetings, sent campaigners to 10 Downing Street, and shouted from the Ladies Gallery during debates in Parliament. The Suffragists knew that changes were taking place in Great Britain and that it would affect the lifestyles that they had and the homes that they lived in, yet nobody wanted their input or opinion. In fact, some unsuitable men had more of an input into the way Britain was governed than women did.

By 1908 most MPs openly supported the right for women to vote. The British Prime Minister agreed that the government would send a Bill to Parliament asking for the female vote. In 1910 and 1911 a Bill was passed. But the Bills did not become law.

The campaign for women’s votes got bogged down in politics. Some MPs did not want ANY women to get the vote. Some MPs were against the Bill because they did not give enough women the vote. Many were against the Bills because they thought the 1 million rich women who would get the vote would vote Conservative. After 1910, the government faced other problems and many MPs thought there were more important things to worry about.

The Suffragettes’ reaction was to increase their violence. They burned down churches and bombed the PM’s house. When arrested, they went on Hunger Strike. In 1913, Emily Davison threw herself under the king’s horse and was killed. If anything, the Suffragettes’ violent action turned people against Women’s Suffrage. In 1914, the First World War started, and the women’s leaders promised to stop campaigning for the vote and to help the war.

During the First World War, women worked alongside men to defeat the enemy. They joined the armed forces as cook, carpenters and drivers. They served as nurses on the Western Front. At home, they worked in arms factories, and as firemen, bus drivers and navvies. Politicians, including Asquith, lined up to praise them.

1917 was a year of crisis for the government. The battle of Passchendaele was going badly, and the French soldiers mutinied, threatening to take the French out of the war altogether. People – particularly those men soldiers who did not have the vote because they were not ratepayers – were asking what was in the war for them. The government had to look to maintaining morale, and began to speak about making ‘a land fit for heroes’ when the war was over. In 1917, the government decided to give the soldiers the vote. The women suffragist societies demanded that they, too, be included. In 1918 the right for women over the age of 30 to vote was made law.

BBC Archive. A collection of oral history interviews with women who were involved in the campaign for womens votes.

Parliament Archives. Documents and information about the Suffrage Movement from the archives of the Houses of Parliament.

History Learning Site. A narrative of the campaign for female suffrage.