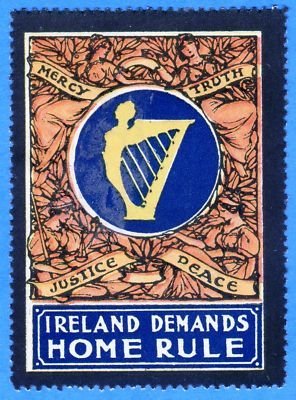 Home Rule is the name given to a political structure that would have given a degree of independence to Ireland. many areas of policy would, under Home Rule, have been determined by an Irish parliament. The Parliament Act of 1911 meant that the House of Lords would no longer be able to overrule the House of Commons on issues such as Home Rule for Ireland. This gave Irish Nationalists hope that in the coming years there would be steady progress towards gaining Home Rule for Ireland. This was particularly so as the Liberal Government of the day needed the support of Irish MP’s in order to secure a majority.

The outbreak of the First World War changed political priorities and moving towards Home Rule was temporarily delayed. The events of Easter 1916 then changed political views on the Irish Question in London. Following the Civil War in ireland, and partition, a government that was independent of London was formed in Dublin and the Irish Free State formed in the south. 6 counties in the north continue to be ruled as part of the British administration.

A Government for Ireland that was semi-independent of Westminster was feasible. Similar had been done for Canada etc. Such a system devolves some policy decisions from London to the devolved parliament. This is how the current devolved assemblies in Scotland and Wales work. In this way the Irish would have had control of things such as Education, Transport, Welfare. Issues around Defence, International Trade etc would stay with the central government in London. Northern Ireland has a similar system of Government. However in this case there is a Power Sharing Agreement which makes the system of government quite different to those elsewhere.