The Shortest War in history lasted just 38 minutes. It was fought between British Troops and forces loyal to the newly self appointed sultan of Zanzibar, a British Protectorate off the coast of Africa.

In August 1896 the pro-British sultan of Zanzibar, Hamad bin Thurami, died. The terms of self rule that had long been in place stated that the Sultan and de Facto ruler of Zanzibar, had to be approved by the British Governor of the Island. 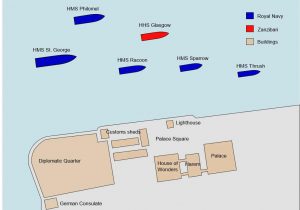 There were two main candidates for the position. The British preferred a man called Hamud bin Muhamad, a man who was known to be supportive of continued British overlordship. The alternative ruler was Khalid bin Bargash.

Perhaps buoyed by his popularity amongst the population, bin Bargash announced himself to be the new leader of Zanzibar without consulting the British. He and some 2500 men occupied the Palace Complex on Zanzibar Square. Bin Bargash was also a relative of the deceased Sultan and, as is typical of many parts of the world, would have considered himself to be next in line. 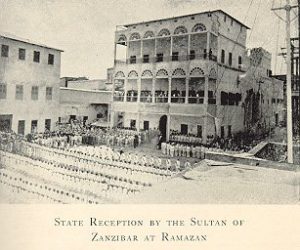 The Palace Complex prior to the War

The British were furious that he and his followers had taken it upon themselves to determine who ruled Zanzibar. A previous Sultan, Ali, had signed agreements with the British that they were protectors of Zanzibar and had the right to maintain some control over law, order and governance. In return the British had allowed a strong Palace Bodyguard of 1000 men to be maintained at the Palace complex and a large degree of self governance. In addition, bin Bargash had been warned previously about attempting to take control: he was implicated in the assassination of a previous Sultan and told quite firmly by the British that any attempt to take power for himself would not be tolerated.

The British forces and High Command in Zanzibar followed standard international procedures before taking any action. An ultimatum for bin Bargash and his men to vacate the Palace and lay down their weapons was made. British troops and ships of the Royal Navy were brought up outside the Palace, providing bin Bargash with no doubts at all what the consequences of failing to adhere to the terms of the ultimatum would be.

Throughout the 26th of August lines of communication between the two sides remained open. Bin Bargash remained defiant throughout, despite being able to observe the movement of British forces around the Palace complex. The Ultimatum was to expire at 9am the following day. As late as 8.30am on the morning of the 27th August messengers were exchanging the views of the two sides. The final message from Cave, the British commander simply stating, “We do not wish to open fire… but will if you don’t do as told…” (not an exact quote)

At 8.55am the British ships hoisted the ‘Prepare to Engage’; flags. There was no response. The Ultimatum expired at 9am. At two minutes past the British Ship Thrush opened fire. It’s first shot destroying one of the few heavy weapons inside the Palace complex. The barrage was short but devastating. One plucky crew who sided with the self appointed Sultan lifted anchor of the George, a ship that had been given as a present to the Sultan by the Queen some time before. They opened fire on the British but were swiftly destroyed by the return of fire and hoisted the Union Flag as a sign of surrender shortly after sinking in the very shallow waters of the port.

On land British ground troops were fired upon as they approached the palace. Supported by fire from the Royal Navy they only faced small arms fire – all of the machine gun posts inside the complex having been decimated. At 9.40 the fighting ceased and the British had total control of the Palace complex and surrounding areas. Fighting had lasted just 38 minutes.

The British suffered just one casualty: and he fully recovered from his wound. In contrast the forces within the Palace complex are reported to have suffered some 500 killed or wounded. Accounts make it clear that all of the machine gun posts were taken out by British artillery and the bulk of the defenders dead were those manning these guns.

As the British took control of the palace complex Bargash managed to evade the troops and sought refuge in the German Consulate. Negotiations with the Germans resulted in Bargash being transferred to German East Africa: there was no extradition permitted of political prisoners between Britain and Germany at this time. Bargash was captured in 1915 when British troops overran his place of refuge during the First World War. He died in 1927, having been granted permission to see out his days in the former German colony. The followers of Bargash were forced to pay reparations to the British to cover the cost of the bombardment. This amounted to roughly 300000 rupees to pay for the cost of the 500 shells and 4000 machine gun rounds that had been fired  Large parts opf the palace were beyond repair and a new complex was built to house the British secretariat which now ruled Zanzibar with the British appointee Hamud a ceremonial figurehead.

Note: 38 minutes is the most commonly cited length of this war. It is not the only length of time that has been suggested though as records vary as to exactly when a cease fire and surrender was called and there is some dispute over what constitutes the exact beginning of a war. However, that is rather immaterial as the lengthiest duration noted from the records would still place the entire conflict at a maximum of 45 minutes: by far the shortest war on record to date.