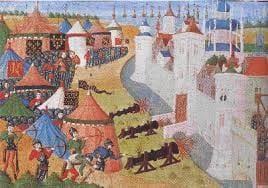 No, that isn’t a typo on the date. 20 years before he sent an army under Richard into Scotland, Edward IV had intended to invade. Why? Simple, the Scots were aiding the Lancastrians who were holding out in the North East of England. They’d also sent forces to join in the march on London. Defeat the Scots and Henry VI and Margaret of Anjou would have little hope of returning to power.
But it’s an invasion that never took place. Why not? Firstly and perhaps most predictably, the Lancastrians knew about the invasion and plotted its undoing. As Edward marched north, the Earl of Oxford would follow him and show his true colours once news reached him of the second part of their plan: the Duke of Somerset landing, aided by France, on the south coast and marching on London.
Secondly, Edward struggled to raise an army. Commissions of Array were issued. And the numbers just didn’t rally to the call. Evidence? Justices of the Peace were later ordered to deal with those who had let the king down. One notable example being Cheshire, where the Stanleys were ordered to arrest all who had failed to answer the call to arms.
Edward found out about the Lancastrian invasion plan. He also had too few men: lots were engaged in mopping up operations already. So the invasion didn’t happen and the problem of the North-Eastern Lancastrian resistance had to be endured for a few more years.
Image: medieval cannon, sourced from the medieval combat society.
Dan Moorhouse