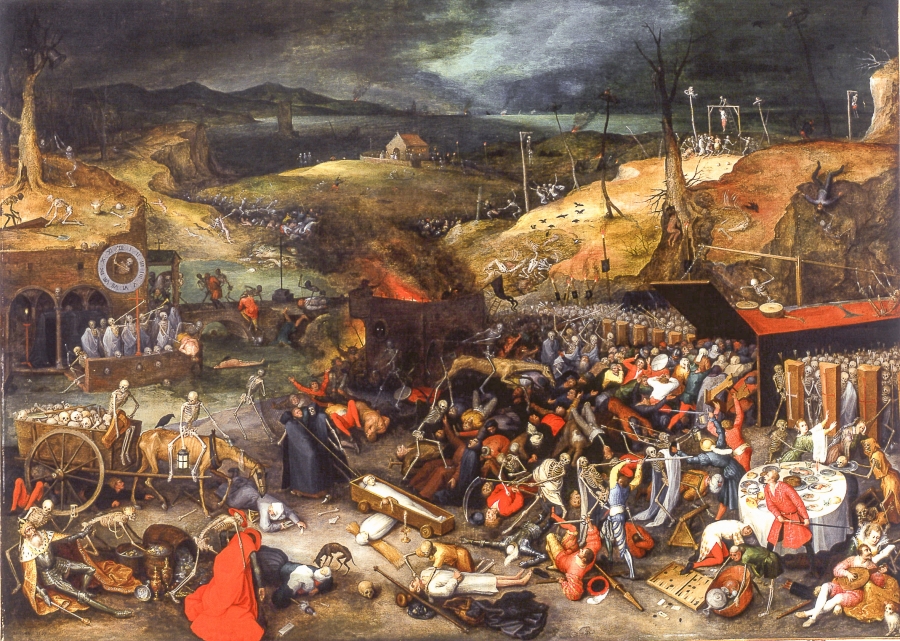 The Triumph of Death is a famous painting that relates to the Black Death. It was painted by Pieter Bruegel, the Elder in 1562. The oil painting may have been influenced by later outbreaks of the Black Death. Art Historians have debated Bruegel’s painting for some time. In general they believe it is a moral statement about the spread of the disease. This can be seen through several aspects of the painting. The Black Death first hit Europe in the 1340s. It had spread from Asia quite slowly, then rapidly through Europe along the more developed trading routes.

The image below is interactive. Look for elements of the painting that give clues about peoples beliefs and actions in relation to the Black Death. A number of these have hotspots which provide a brief summary of how that belief developed or what people are shown to be doing.

Paintings that encompass such a wide area are often nice, pretty, landscapes. They often show the natural beauty of an area. Sometimes they depict a glorious victory in battle and show the region that is now controlled as a symbolic image of victory. Here we see a landscape dominated by death and the peoples fight against it. Bruegel includes many skeletons doing the work of humans. This is a typical use of imagery. These skeletons are not always the dead themselves but sometimes people whose work is directly linked to the Black Death. One example in The Triumph of Death is the skeletal driver of the cart that is carrying skulls. This is illustrating a grave digger taking the dead to burial.

A genre of art emerged around the Black Death that is called the Danse Macabre. It translates roughly as the dance of death. In art of this genre skeletons are often seen dancing or performing routine tasks. The genre has some variants and it is possible that Bruener was influenced by this earlier work. The ideas were also evident in English artwork and in Literature. These emerged in England in the 1420s and spread into Scotland. The artwork was still a reasonably popular genre as the Tudors ruled England.

One extract from a Danse Macabre poem is:

Deeth fauorable is to no maner wight;
To all hir self shee delith equally;
Shee dredith hem nat þat been of greet might,
Ne of the olde and yonge hath no mercy;
The ryche & poore folk eek certainly
She sesith shee sparith right noon estaat;
Al þat lyf berith with hir chek is maat.

The Black Death is taught to pupils as part of a study of Medieval Times or as an integral part of a course of the History of Medicine. There are lots of facts and figures relating to the outbreak of the Black Death. The disease returned on numerous occasions and has appeared in history under several different names: The Black Death, the Great Plague, The Great Mortality, are all the same disease. The Black Death refers to the epidemic of the 1340s in Europe. In England the term the Great Plague usually relates to the outbreak in and around London in 1665.

Compare the imagery here to that shown later on in relation to The Great Plague or the outbreak of Cholera, This can help you to understand continuities and changes in the way that people viewed epidemics.

Home » Medicine Through Time » The Triumph of Death: Image analysis on the Black Death
a