Isabella of Angoulême, The Tangled Queen is a historical fiction novel authored by Erica Lainé. Erica lives in France and was inspired to research the life of Isabella of Angoulême due to the proximity of the Queen’s birthplace to her own home. The result is a well-researched trilogy based on the real story of the wife of King John of England. Erica has held various roles prior to taking up writing. This included work as a speech and drama teacher, a writer of TEFL textbooks for Chinese primary schools, and an educational project manager for the British Council in Hong Kong. She was awarded an MBE for her work there. 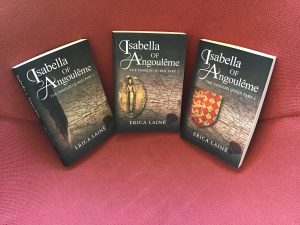 Isabella of Angouleme, wife of King John is the subject of your novel. Let’s get the obvious question over with straight away: Was he a bad king?

Without putting 21st sensibilities onto the man and his time, yes. No amount of revisionist history can stop the opinion that he was a bad king. He inherited a great Angevin empire and lost it because he could not command loyalty. He disobeyed the rules of the day and was cruel and greedy. His attempts at reconciliation always ended badly. He managed to enrage his barons and the Church. He didn’t keep promises and he ‘kicked men when they were down.’

What attracted you to the story of Isabella?

When I discovered she was Queen of England in 1200, aged 12 and that this queen was from Angouleme, which is 40 minutes from where I live in France, I had to know more! She was blamed by the chroniclers for the loss of Normandy in 1204. Why? And so down the rabbit holes of research I went.

Eleanor of Aquitaine’s reputation often leads to other women of the period being overlooked. Are there any other females of the period who you think would be great subjects for a work of historical fiction?

This is very true; Eleanor dominates this time in history. I think Blanche of Castile, her granddaughter; married to Prince Louis of France, chosen and brought to France from Castile by Eleanor would be a good subject. She was very able and raised the money for a fleet of ships when Louis was invited by the discontented barons to come to England and take the throne from John! She went on to be regent to her son who was St Louis of France. Another woman I am fascinated by is Eleanor, the youngest daughter of Isabella and John. (And of course, another of Eleanor’s granddaughters!) She was married first to William Marshal (the eldest son of the Greatest Knight) and then to Simon de Montfort. That marriage and everything it brought to the court of Henry III is a complex and important part of English history.

How did you go about researching the true-life story of Isabella of Angouleme?

I began by researching through reading books about King John, there are many with different angles. King John: New Interpretations edited by S.D. Church has one section devoted to Isabella. This is written by Nicholas Vincent and was very helpful. I found an article online in the Revue belge de philologie et d’histoire, by Jordan William Chester: Isabelle d’Angoulême, By the Grace of God, Queen. This opening quote was a big hook for me. Few women were in a position to play as important a role in the history of both England and France in the thirteenth century as the Poitevin countess, Isabelle of Angoulême.

I read a book by Sophie Fougère, Isabelle d’Angoulême, Reine d’Angleterre, which was very clear about her timeline and her influence. I found internet sites that gave clues and a site where her letters have been translated. I read about people she met or who were part of the larger picture at that time. And I also explored some biographies written about her son Henry III. In parts 1 and 2 of my trilogy, I have included a bibliography as many people wanted to read some of the same sources.

In 2011 I took part in a writing workshop in France, which was run by Philippa Pride, the Book Doctor. All the other participants arrived with work in progress, I arrived with a blank and very empty notebook and although I thoroughly enjoyed the daily writing tasks and exercises could not imagine writing something full length. Then someone said, but ‘Look how involved you are in history, find something there.’ So I began my creative writing about Isabella. I also took an online six-month creative writing course at UEA. This was invaluable. And I was delighted that the tutor was particularly interested in historical fiction.

How did you go about planning your novel?

I wrote a chapter breakdown and a synopsis but did not stick to either of these rigidly. As I researched things changed. I kept huge notebooks, handwritten, checking chronology and dates all the time and often getting bewildered about where I was. It was like being a detective, plodding police work, then an insight that gave you a clue to what must have happened. I had to make a grid to keep me on track, the story so far, dates, names, descriptions so that people were consistently described.

How do you balance the fact and fiction when writing this type of novel?

It is difficult when you begin. As sometimes it is like fiction crossed with a history textbook. For the author everything seems vitally important, but this is not so true for the reader. But it is also important that writers should make their best attempt to ensure their work is historically accurate. I think when you write, as I have done about people who really lived, (with the exception of one character, Agnes Roussie, every person did exist) then perhaps you are writing fictionalised history? Or a fictional historical biography? But the settings, the dialogue the interior lives have to be created and imagined. And the tensions between people shown, their reaction to events, the way they plot and plan. I did create some small events, for example, I wanted to show how important to her was her seal as Queen of England. Isabella brought that with her to France and began to use it on charters for herself. I wrote a scene where she did that, and the charter is imaginary.

I think part 1 of Isabella of Angoulême, The Tangled Queen is like a stepping stone into her life.

I wanted to get the chronology correct, and imply cause and effect. I wanted to show how marriages were arranged to suit power alliances.
The author has to take into account how society was organised at that time. One of the most difficult things to have is a deep sympathy and understanding of the place of religion, which affected everyone’s lives in a way it does not today. The church was powerful and could excommunicate kings and entire countries. There was real fear of hell and damnation. I skirted this rather but towards the end of Isabella’s life she is confronted with her beliefs and her misdeeds. I have had some reviews, which find her a difficult person to like for she is a proud woman who wants power and is quite relentless about this. But so were most barons and lords at that time, her problem was that she was a 13th century woman and it is likely she pushed down softer more gentle feelings. I found evidence of love for her second family in France, but her relationship with her children by King John was part of her tangled life.

Margaret Irwin, who wrote a trilogy about Elizabeth 1st. I read this when I was about 12, over and over again. She weaves fact and fiction together most wonderfully. Sharon Kay Penman researches very deeply and creates a very believable medieval world. She manages to keep so many strands and threads on track, it is impressive.

Read as widely as you can. As something grabs at you, write it down, old fashioned notebooks are good for that. If you like a particular author, try to analyse why. As a writing exercise mimic them, it can be inspirational to see how they put things together. Buy a very good thesaurus or a synonym dictionary!

Erica Lainé has been an actress, a beauty consultant, a box office manager for an arts festival, a domiciliary librarian, a reader liaison officer, a speech and drama teacher, a writer of TEFL textbooks for Chinese primary schools, and an educational project manager for the British Council in Hong Kong. She was awarded an MBE for her work there.

After Hong Kong she came to south west France with her architect husband to live in the house he had designed, a conversion from a cottage and barn. She lives here with him, a cat and a dog and rooms filled with a lifetime collection of books. She is president of An Aquitaine Historical Society and through this came to know about Isabella Taillefer, the subject of her trilogy. Isabella of Angoulême: The Tangled Queen.

Erica continues to be fascinated and intrigued by 13th century France and England and their tangled connections.

Erica’s books and reviews on Amazon

Lesson – Was John a good king or a bad king?