Sue Barnard is an author and editor for Crooked Cat Books and Ocelot Press. Her recent works include a novel that explores the hidden years in the story of Emily Bronte’s Heathcliff. A contrasting piece of work is Finding Nina, a multi-period novel exploring secretive births, family secrets and the discovery of these by other family members years down the line. Away from writing novels, Sue has compiled questions for ‘Round Britain Quiz.’ 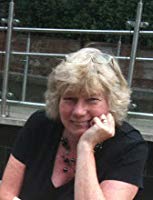 One of your novels looks at the famous character of Heathcliff and asks if the unanswered questions are finally answered. What attracted you to the story of Heathcliff?

I did Wuthering Heights for O-Level (as it then was, way back in the Dark Ages before GCSEs), and we were fortunate to have a wonderful teacher who really brought the story to life. It was she who first sowed the seed in my mind: what could have happened to Heathcliff during the three years when he disappeared from the original story? It’s one of literature’s greatest mysteries, and I thought it would be fun – and challenging – to try to solve it.

Having grown up in Bronteland I’m acutely aware of the level of knowledge readers have about the Bronte stories, the period and the area at the time of Wuthering Heights. How did you go about researching these aspects of the novel?

The biggest constraint when writing Heathcliff was that the dates in Wuthering Heights are very precise: Heathcliff disappears in 1780 and returns in 1783, so I had to find an authentic storyline which fitted accurately with those dates. My original idea was that Heathcliff would have spent his missing years as a pirate (which would certainly fit in with his character), but I quickly discovered that the golden age of piracy was several decades too early. My next thought was that he might have made his fortune in the American or Australian gold rush, but they didn’t happen until the mid-1800s. I did eventually find something which did work, but you’ll have to read the book to find out what that was!

Finding Nina has an intriguing three-period plot and a fascinating storyline. How did you set about researching the different periods and the specifics of how it may have happened? (Oddly enough, I was adopted at birth and tracked down after a chance discovery by a blood relative so this book and your answer will really interest me)

Adoption has always been a big part of my life. Like you, I too was adopted at birth and was traced when a member of my birth family learned of my existence. Perhaps unsurprisingly, much of the story is based on my own experience, although I’ve fictionalised many of the details.

Researching the background was very interesting. The wartime period relied partly on the stories I’d been told by my adoptive family and partly on books and articles about that era. I also did extensive research about the prevailing hostile attitudes to unmarried mothers, many of whom were forced to give up their babies for adoption.

How I made contact with my birth family is another story altogether and would probably fill an entire book on its own. I’d write that book if I thought anybody would believe it.

You also have a story that acts as both a prequel and sequel to the story of Romeo and Juliet. Are the manuscripts that you refer to in the novel real or fictitious?

It’s no secret that Shakespeare based his play on an existing work, and some theories suggest that the original story has its basis in fact. The idea behind The Ghostly Father is “What if the story of Romeo & Juliet really happened, but not quite in the way we’ve been led to believe?” I’m happy to leave it to the reader to decide!

Are there any particularly useful resources that you have come across as research tools when writing your books?

The internet is a mine of information – and also a great thief of time. When I was writing Heathcliff I found a site which contained everything I could possibly end to know about one aspect of the story. The next time I looked at the clock, two hours had passed and I hadn’t written a single word!

How do you balance the fiction and the fact?

What is your planning process?

I start with a basic idea, make a few notes, then go from there. I try to write my stories from beginning to end, but sometimes scenes are written out of sequence as they occur to me and are fitted into the manuscript at the appropriate point.

Lots of schools do make use of historical fiction in lessons, did you take that into account when writing your time travel novel? Do you think that historical fiction can help them to understand the period that your novel is set in?

I didn’t specifically set out with that in mind, but it’s true that studying works of fiction can lead to a much better understanding of factual events. For a fine example of this, look no further than the amazing “Blackadder Goes Forth”, which is now shown in schools to illustrate the tragic lunacies of the Western Front. [editors note: maybe not so often these days but I remember seeing it used lots when training]

Who are your favourite authors (or historians)? How have they influenced your own work?

Shakespeare has been the inspiration for two of my novels and quite a few of my poems. The Brother Cadfael novels by Ellis Peters helped me to get into the mind of a medieval monk when I was writing The Ghostly Father. And I love the Discworld novels of Terry Pratchett. I’m very sad to think that there will be no more from the same pen.

What plans have you for your writing? Will it continue to be set in this period or do you see yourself writing in different genres or historical periods?

At the moment I don’t know. I’d quite like to try writing something in the sci-fi or fantasy genre, but that would be very steep learning curve and I’m not sure I’m ready to step so far outside my comfort zone.

What tips do you have for aspiring writers, of any age?

Join a writing group, either online or in real life. Writing can be a very lonely process, but it doesn’t have to be – and you’ll get invaluable feedback from fellow writers. Set yourself realistic goals. Aim to write something every day, even if it’s only a sentence or two. Above all, enjoy your writing. As Terry Pratchett once said, writing is the most fun you can have by yourself.

POETRY: Variations on an Apology