On November 9th 1918 Prince Max von Baden, the Imperial Chancellor, announced the abdication of Kaiser Wilhelm and the Crown Prince. He also transferred his own position of Chancellor to Fredrich Ebert, leader of the SPD. Ebert immediately set about forming a coalition government that could administer Germany in the interim. He made an agreement with the USPD, a Socialist party, which placated many of the disillusioned workers, soldiers and sailors. Workers and soldiers councils confirmed this on 10th November. Also on 10th November the armed forces agreed to support the new government, on the understanding that the government would support the High Command in its attempts to preserve high levels of discipline within the forces (Mutinies were common at this point, see notes on the problems Weimar faced upon its inception). 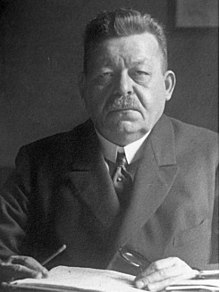 The interim government was faced almost immediately with problems. In December the left wing Spartacist group held a demonstration that had to be suppressed by use of armed forces. In January this group again threatened the fledgling government, as the Spartacist Uprising occurred. Again the interim government made use of force quell the rebellion. Following the successful defeat of the Spartacists elections were held across Germany for the National Assembly.