Glencoe Massacre took place on 13th February 1692. It marked the end of the 1688-92 Jacobite Uprising in Scotland. The massacre took place at Glen Coe in the Scottish Highlands. British government soldiers massacred members of the MacDonald Clan who were billeted with them. This massacre, of an estimated 38 men, was despite agreements being made regarding the cessation of hostilities and an oath of allegiance being agreed to William and Mary. 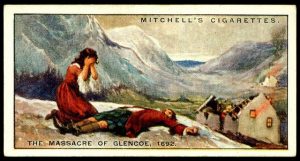 As the Williamite Wars of 1688-91 drew to a close in Ireland the British Government opened negotiations with Scottish Jacobin leaders. Agreements were made for the Clans to swear allegiance to William and Mary in return for peace and a sum of money from the Government.

A deadline was given of 1st January 1692 to sign the oath of Allegiance. The Clans were still bound to James II by oath and asked his permission to swear allegiance to William and Mary. This would protect the clans and there was little hope of James now being restored to the throne.

Consent from James to swear allegiance was received in the Highlands on 28th December. The leader of Clan MacDonald set out to swear his allegiance. He arrived at Fort William to swear allegiance but was told that this had to be done to a sheriff. This meant a 60 mile journey to the nearest one, at Inverness. He set out but was detained by men from Clan Campbell, with whom he had ongoing disputes.

After a wasted day, he set out again and reached Inverness. In Inverness Maclain, leader of the MacDonald clan, was detained again as the sheriff was not present. This meant that when the sheriff returned, the deadline had passed. McClain managed to persuade the sheriff to accept his late oath of allegiance. This was then duly sent to Edinburgh. 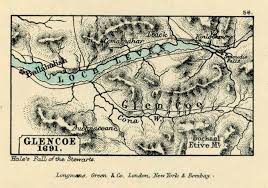 Unknown to McLain, the Secretary of State, John Dalrymple, Master of Stair, declined to accept the late oath. He had engineered a situation in which McLain would be hard pressed to swear it and now used it to his own ends. As a lowland protestant lord, Dalrymple stood to gain from the destruction of the clans and he particularly disliked the MacDonald’s.

Dalrymple used the animosity of rival clans to execute his plan. He sent divisions of forces from Argyll and Fort William into Glen Coe. Traditionally Highlanders gave shelter and lodging in lieu of paying tax. The Argyll men were British soldiers but largely from the Campbell clan, MacDonalds neighbours.

On the 13th February the weather was appalling in Glen Coe. The men from Argyll were gathered together by their commander. He revealed the purpose of their stay in Glen Coe. Their orders were to put to the sword each man under the age of 70.

38 are believed to have been killed in the Glencoe massacre, including the clan chief. It is believed that some of the MacDonald clan were warned by appalled Argyll men. Some historians also believe that the units that had not arrived at Glen Coe had deliberately failed to get there to avoid participating.

The cold blooded execution led to outrage. It became a rallying point for anti-government protests. In government, Dalrymple was forced to resign, though nothing more was done about the incident. Within the Highlands it led to the Campbell clan being viewed as collaborators with the British and as accursed traitors. The Glencoe massacre is still remembered as an example of the repression of the highland lifestyle.