The Royal African Company was established by Royal Charter under King Charles II. It gave a monopoly to the Royal company on trading in Slaves from ports in West Africa. The purpose of the charter and monopoly for the Royal African Company was to combat the Dutch dominance of Western African Slaving ports. With a monopoly in place, the Stuart monarchs stood to profit greatly from a more efficient trade in Slaves. 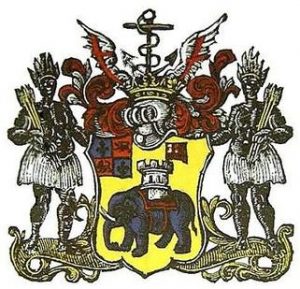 The Royal African Company managed the trade of Slaves in West Africa. It was granted a monopoly by Parliament which meant that other shipping companies could not participate in the trade. This monopoly was challenged and rules flouted by British merchants eager to profit. The Royal African Company reached a peak in trade under James II. 38 ships left West African Slave Ports as part of Triangular Trade in one year of his reign. 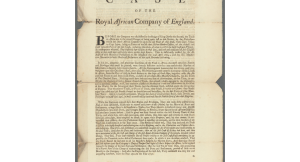 Why did the Stuart’s establish a Royal African Company?

Slavery was paying dividends. Other European powers such as the Spanish and Portuguese had begun to exploit the New World. Since the 1560s the English had been eyeing the prizes brought back with envy. They had not, however, shown much interest in the emerging transatlantic trade in slaves. A few slave ships under John Dawkins had been sent to English colonies in the 16th century. The West Coast of Africa was not, until the mid 17th century, of much interest to the British.

Interest in the West African Slave Trade grew as a result of the Anglo-Dutch War of 1652-54. The Dutch had a large mercantile fleet operating in the Atlantic off the coast of West Africa. It had posed a threat to the Royal Navy during this entirely sea based war. Following the restoration of King Charles II this threat was identified and an opportunity noted. Among Charles’ closest advisors were Prince Rupert, who was from the Rhineland, and Richard Holmes, an Anglo-Irish mercenary. Rupert had visited parts of West Africa. Holmes was keen to take on the Dutch.

Prince Rupert learnt of the riches that African leaders were acquiring from the interior of the continent. He persuaded Prince James, Duke of York (Future James II), to lobby for an English interest to be established in the area. This lobbying led to the authorisation of a mission, led by Holmes, to Gorée.

Holmes, as detailed below, established trade in West Africa and the success led to the company being formalised by Royal Charter. Turning the venture into the chartered Royal African Company meant that shares could be bought or sold. This allowed the royals to profit from the company through its trading, or through trading in its shares.

How did the Royal African Company establish itself within Africa?

Holmes was amazingly brazen in his method of gaining a foothold. When he landed at Gorée, he simply told the Dutch Governor that the coastline from there to the Cape of Good Hope, ie the whole of West Africa, was now under English control. The Governor had little choice but to concede to Holmes. Holmes then proceeded to establish English trading connections in Gambia. He returned to London with a show of wealth which led to the decision to formulate the trading through a royal chartered company.

The Company of Royal Adventurers Trading to Africa continued to build on Holmes’ work in Gambia. Trade routes within the interior were opened up and profits grew for a new Gambia Adventurers Company. In 1665 £200000 was acquired through metals; £100000 from ivory, hides and pepper. Gambia Adventurers Company records show a new item being traded from 1663: Slaves. In 1665 a quarter, £100000, of the companies income was derived from trading in slaves, it grew in the following years.

It became clear that profit could be made from each of these trades. In particular Slavery, as the plantations were buying all of the slaves that could be transported to expand. The problem for the English was that they faced competition. The Swedish had a trading port at Cape Verde, the Dutch continued to trade from the West Coast. Pirates remained a threat to shipping. Profit was being limited.

The Duke of York and his friends were not pleased with the interference in trade. Despite the reluctance of Charles II, they managed to force the issue. Holmes was once again sent to the shores of West Africa. Though war with the Dutch was likely to start soon, he made certain of it. English ships attacked and sank or captured several ships. The rampage turned sour for the English though. The Dutch fleet not only defeated the English on the West Coast of Africa, it bombarded the English mainland at Chatham and seized English territory in the West indies. The peace was not in England’s favour, though one concession made to England was the gifting of a then unimportant settlement that we now know as New York.

It took until 1672 for the position to be recovered. A new merged company, the Royal African Company, received a Royal Charter. It had secured rights to send 5600 slaves a year to plantations in the West Indies and Virginia. The company by this point was managed by shareholders and merchants rather than by the royals.

Threats to the Royal African Company

The Glorious Revolution posed a threat to the RAC. Once again the English were embroiled in a continental war and it had implications for merchant shipping. Though now allied with the Dutch, the fleet had to contend with the French. During these wars the company saw up to a quarter of the fleet captured and held by the French.

Piracy continued to pose a threat. This was minimised by the presence of the Royal Navy but privateers could present a problem for merchants. Merchants themselves created problems. Many local chieftains were willing to bypass agreements and would engage in deals with private traders. This reduced the costs and made for a tense atmosphere.

By 1700 the Royal African Company was established as the leading trader in Slaves. The company continued to be the main slave trader until 1731. At this point it transferred its commercial trade to gold and ivory. The Royal African Company was then disbanded by parliament in 1752. Upon the dissolving of the company, assets were transferred to the Company of merchants trading to Africa. The Slave trade continued until 1807.

The British Academy has a pdf file of Company correspondence 1681-99. It can be accessed from this page.

Academic research can be found in this book. It is available through online subscription which many University libraries will have and some Local Authority libraries.

Constitution and finance of the Royal African Company from its foundation to 1720. Scanned pdf file. Primary Source Material.

The History Channel has a page on the Royal African Company.