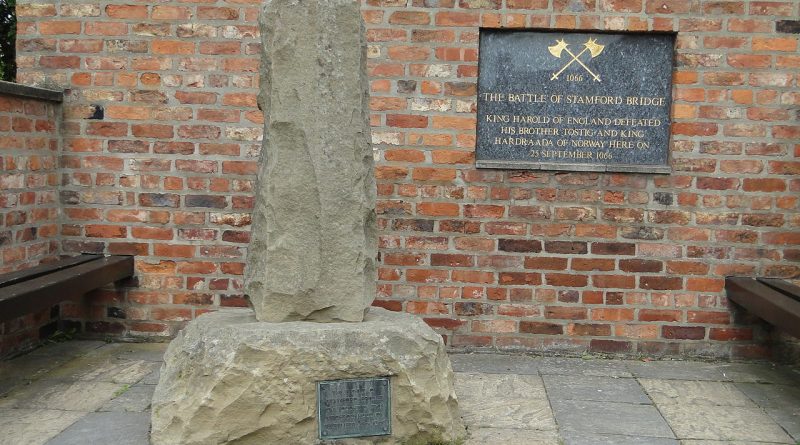 A statement on the Stamford Bridge Heritage Society’s Facebook Page reveals that the society and partners have made significant finds in relation to the 1066 battlefield. The Battle of Stamford Bridge itself is well known. It along with the Battle of Hastings and Fulford are the three major clashes in the Year of Three Kings and the story of the Norman Conquest. However, whilst the fate of Harold Hardrada at the hands of the Saxon army of Harold Godwinson is well known, little is known about the place where this hugely important battle was actually fought. Until, perhaps, now.

Recent finds by two metal detectorists near to Stamford Bridge may be the first evidence of the great Battle of Stamford Bridge 1066. The significant number of detecting finds which include a Viking Axe and Saxon Spears were discovered by Simon Richardson and John Benfield who have been working alongside Stamford Bridge Heritage Society for a number of years. Finds from this period are extremely rare and are thought to be of national importance.

The Battle of Stamford Bridge which took place in 1066 was between the English forces led by King Harold Godwinson and those of the great Viking army led by King Harold Hardrada of Norway. The English victory saw an end to Viking influence in England but a few days later the Anglo Saxon Kingdom would fall at the Battle of Hastings. The battle remains one of the most significant events in both English and Scandinavian history.

Finds of this kind are investigated in detail by a combination of local and national experts. The rare finds have been registered with the relevant authorities which enables a more detailed examination of the area to be carried out. To protect the integrity of the potential finds, the location is to be kept a closely guarded secret.

The society will be shortly launching a fund raising program to help fund further research and conservation of the finds.

Battle of Stamford Bridge – The Norman Conquest – The Vikings